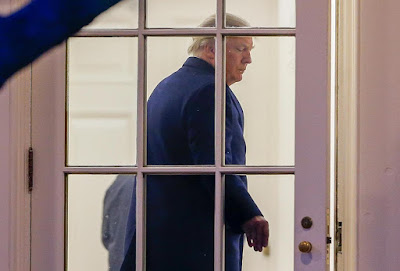 The Nigerian presidency has warned its citizens not to travel to the US amid ongoing uncertainty over Donald Trump's executive order banning immigration from certain Muslim-majority countries.

Nigeria is not on the list of six countries affected by Mr Trump's so-called travel ban executive order, but the special assistant to the President on foreign affairs and the diaspora said in a statement that several Nigerians with valid visas have been refused entry to the US.

Abike Dabiri-Erewa said their visas were cancelled when they landed in the US and they were put on return flights.

he said: "Nigerians who have no compelling or urgent reason to travel to the US to postpone their travel plans until the new administration's policy on immigration is clear."

Earlier in February the US State Department warned US citizens to avoid travelling to Nigeria due to violence from extremist group Boko Haram, and said the security situation in northeast Nigeria remained "fluid and unpredictable".

The advisories come several weeks after Mr Trump's travel ban, affecting seven Muslim-majority countries, was knocked down by a federal court in Washington state. The President's emergency appeal via the Justice Department was denied.

Instead, the President said they would work with the federal judge's provisions to craft a new ban which leaves out Iraq, one of the seven countries.

The initial ban was signed in late January and prompted massive protests around the US.

The President said the order as signed to protect the country against terrorism, yet no individual from those countries had killed a single American on US soil in a terrorist attack since 2001.

House Speaker Paul Ryan and Department of Homeland Security chief John Kelly both said the confusion at the roll-out of the ban was "regrettable" but they both publicly supported the ban to defend the country.
at March 07, 2017
Email ThisBlogThis!Share to TwitterShare to FacebookShare to Pinterest