How a dual citizenship crisis befell an immigrant nation 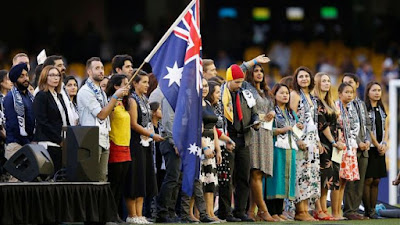 Then a third stood down from his cabinet post on discovering that although he had never even been there, he was a citizen of Italy.

The past two weeks have been a minefield of frenzied activity from elected Australian politicians as they check if they hold dual nationality. It's all been done under the suddenly menacing shadow of the 116-year-old Section 44 of the nation's constitution, which forbids anyone holding citizenship of another country from running for parliament.

It's an issue which says much about Australia as an immigrant nation, as federal MPs who were born overseas - 25 of them in total - have raced to check which country, or countries, count them as citizens.

While lurching towards comedic farce, the "dual citizenship crisis" has drawn serious scorn for politicians and their attention to detail, after other recent so-called oversights in areas such as official travel expenses and the declaration of assets.

It has also raised the question: how can a populace be sure the people they're electing to represent their interests and advance their country will do just that?
And it has had serious ramifications for the political parties concerned and of course the MPs, with questions over whether they should pay back the vast sums of money earned as parliamentarians.

Succession of disclosures
In particular, the situation has rocked the Greens, the environment-driven party seen as the biggest parliamentary force outside the dominant duopoly of the conservative Liberal-National government and the Labor opposition.

The embarrassing eligibility conundrum began rolling on 14 July when the Greens' co-deputy leader Scott Ludlam, who left New Zealand aged three, suddenly resigned from parliament. The West Australian senator was informed he still held dual citizenship - since he had not formally renounced New Zealand - after some digging by an adversarial Perth barrister, who warned of a High Court challenge to Mr Ludlam's parliamentary qualifications.

This prompted checks by the Greens' other co-deputy leader Larissa Waters. Widely applauded months earlier for becoming the first MP to breastfeed in parliament, Ms Waters tearfully announced her resignation on finding she was still a citizen of Canada.

She was born there, to Australian parents, who brought her back to their homeland when she was a baby. Similar to Mr Ludlam, she wrongly assumed she'd automatically rescinded Canadian citizenship on becoming an Australian.

While rivals carped that the Greens were a shambles, a few days later National Party senator Matt Canavan resigned his post in Prime Minister Malcolm Turnbull's cabinet as minister for resources and Northern Australia - after a call from his mother.

Maria Canavan, like her son, was born in Australia. But in 2006, due to her Italian parentage, she had registered herself and her three children for Italian citizenship. Mr Canavan, who was 25 at the time, said he'd been unaware of this as his mother hadn't told him.

While he has resigned his ministries, he has so far remained in parliament. The government has said he was not in breach of the constitution as he had been unaware Italian citizenship was acquired on his behalf. His eligibility will now be decided by the High Court.

Elsewhere, a Labor MP from Tasmania, Justine Keay, has confirmed she revoked her UK citizenship before last year's election, but is not saying when. Calls are growing for proof she was eligible at election time.

Queensland senator Malcolm Roberts from the far-right One Nation party, has added to the mess by declaring he renounced his UK citizenship, though it was not confirmed by UK officials until after his election last year.

The constitution's Section 44 (i) states that any person who "is under any acknowledgment of allegiance, obedience, or adherence to a foreign power, or is a subject or a citizen or entitled to the rights or privileges of a subject or a citizen of a foreign power... shall be incapable of being chosen or of sitting as a senator or a member of the House of Representatives".

This is interpreted by the High Court as meaning anyone with dual citizenship is not permitted to run for office. Though the clause has so far affected three seemingly innocent victims, it is unlikely to be changed because of the difficulty of altering the Australian constitution.

While formality is not considered a traditional Australian trait, the rash of formally checking credentials says much about the country.

Although other countries' constitutions hold stipulations about MPs' citizenship, the problem is not as likely to be seen elsewhere. In the UK, for example, only 13% of people were born in another country. The rates are slightly higher in two other nations drawn into Australia's saga - Canada (22%) and New Zealand (23.3%).

Five takeaways from Australia's census
Section 44 was included in the constitution when Australia gained Federation in 1901, when issues like war, treason, the interests of country and empire may have been the key motivations.

"In 1901 if you weren't a British subject you might have your loyalty questioned," Dr Paul Kildea, senior law lecturer at the University of New South Wales, told the BBC.

While multicultural Australia is vastly different now - even Britain was declared a "foreign power" in a 1999 High Court ruling on Section 44 - Dr Kildea said the principal behind the clause still stood.

"If the Australian parliament is presented with a bill which affects another nation, the clause is designed to ensure that MPs will be putting Australia's interests first," he said.

Dr Kildea said the clause could be altered to reflect modern Australia's make-up - either to demand more simply that candidates have Australian citizenship, or have them declare their dual nationality and let the voters decide. A third way was for the High Court to make a ruling, which could then be cited as precedent, that an MP had to have been aware of his or her dual nationality to be ineligible.

Regardless of the motivations behind the clause, Dr Kildea said there were still questions over whether it served its designed purpose.

"Just because an MP is not a citizen of a certain country doesn't mean they won't favour that country, as things like political donations from foreign countries have shown," he said.

Far from being dismissed as quirky oversight, the current saga has brought calls for Australia's parliamentarians to observe the same bureaucratic requirements imposed on the population.

News Corp Australia political commentator Malcolm Farr wrote that the exposed MPs had appeared "unable to properly fill out basic official forms - the type of incompetence which earns some on welfare a string of nasty communications from [welfare agencies] and financial penalties".
"It is all up to the candidates, and those who can't match the demand for detail surely cast doubt on their ability to be parliamentary representatives," he said.