A Nigerian Converted A Motorcycle Into An High Heel Shoe

Meet Danladi Ibrahim, a 23-year-old Nigerian man based in Kaduna who converted a motorcycle into a high-heeled shoe that can be moved. 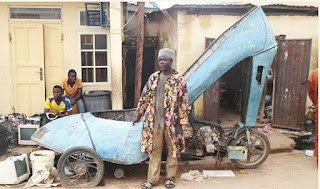 How creative is Danladi Ibrahim’s invention??

According to Splufik Nigerians, Danladi was only seven years old when he started going to his father’s shop to watch how he repaired different bicycles. A decade later, having developed much interest, he decided to drop out of Rimi College, Kaduna to venture into welding after which he became a motorcycle mechanic.

Ibrahim now uncouples and repair things formerly strange to him. One of his many inventions is a two-wheel motorcycle he reconstructed to a tricycle shaped like a lady’s shoe.

“I was mocked but I did not give up,” said the 23-year-old.
“I’m very happy to have proved myself worthy against the doubts of so many people who felt I was just wasting my time.
They watched me as I made those unique items and I’m glad I’ve never been involved in any form of accident.
“I have been riding it for two years now and I did the test drive on a distance of about 25 km. Along the way, the police overtook me and asked me to park and I complied.
I thought they wanted to arrest me, but to my astonishment, they brought out their phones and took a snapshot of me.”
According to Danladi, no government agency like the NBTI, NDE or a technical institution like Kaduna Polytechnic or Technical College Malali has ever contacted him on how he can develop or teach youngsters in a joint partnership. He also urges parents to encourage their children to acquire skills, especially when they are still young.
at February 15, 2017
Email ThisBlogThis!Share to TwitterShare to FacebookShare to Pinterest