CharlyBoy "I am prepared to lead national revolution against corruption"

CharlyBoy, maverick superstar and social activist, has said he would lead “national revolution against corruption” to support the current anti-corruption war by President Muhammadu Buhari. Charly Boy said this in an interview on Monday in Abuja. 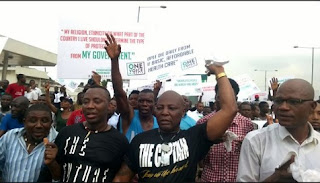 “I cannot stand back and watch my country, my home get looted to the point of monumental destructiveness. “In the life of every human being, there comes a moment when we must make a stand for that which matters. “Those who are capable of helping the government recover loots for our benefit are intimidated by fear of death.

“I am prepared to lead a national revolution against corruption and in support of President Muhammadu Buhari’s anti corruption war. “This is part of my nationalistic engagement to help PMB root out corruption and mindless political criminality out of the Nigerian polity, “he said. CharlyBoy expressed displeasure over the alleged looted funds by some Nigerians who at one time or the other occupied public offices in the country.

The music star stressed that until the ordinary Nigerians rose up against corruption, they would remain in perpetual deprivation. Look at what dollars and another 750,000 pounds would have done in making life better for the average Nigerian.

“Nigerians must rise in unison to fight corruption because if we fail today, our suffering will not end and many of us will die for nothing. “Our failure as a country is our fault as a people.” The activist, who described himself as the ‘President of fellow frustrated Nigerians’, however, commended Buhari for being determined to recover looted funds, especially through his “whistle blower initiative. He, therefore, urged Nigerians, especially the youth, to rally support for the president and not to “celebrate corruption in all its forms”.
“For decades, I have never heard thieves return so much money to the system. “I urge all of us to shine our eyes, so that we will not use our hands to spoil what is left of our future because the stealing is too much.” He also commended the Economic and Financial Crime Commission (EFCC) and pledged to rally support for it and other enforcement agencies.

“I will meet with EFCC boss, ICPC boss, Police boss and all those trying to give this country renewed hope. “Very soon, the voice of ordinary Nigerians will be so loud that the interest of the frustrated Nigerians will be a priority.”
at February 13, 2017
Email ThisBlogThis!Share to TwitterShare to FacebookShare to Pinterest