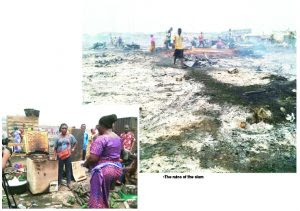 Mr. Simeon Ibike, a father of six, is at the moment in serious pain. He lost goods worth over N7 million to the Oko-Baba Sawmill fire that occurred in the Ebute-Meta area of Lagos on Sunday evening.

He told the reporter that the world had crumbled on him. According to him, he had a big container, which he used in selling assorted building materials. His shop was described as one of the biggest in the area. But all became ashes in less than three hours.

Ibike, who looked shattered, said all his family members, including his four children in the university, depended on the business for survival. He lamented that he could not salvage a single item from his container.

He said he had gone to church on that fateful Sunday to pray to God and thereafter proceeded to a town hall meeting with his kinsmen, without any premonition that he would soon become impoverished by one single disaster.

He narrated that by the time he rushed to the scene, after a neighbour alerted him through a telephone call, it was rather too late. His shop was already in uncontrollable flames.

He confessed that he couldn’t help, as tears welled up in his eyes and rolled down his cheeks. Daily Sun learnt that the man wanted to jump into the fire but was rescued by sympathisers.

Ibike was also a victim of a fire incident at the same area two years ago.

“It is painful that everything I have laboured for in the past 20 years is gone finally. The one that happened in 2015, I was able to rescue some of the goods. But I couldn’t rescue anything, not even a single pin this time around. It was a family business. I don’t know what to do next because I don’t have any money or goods somewhere else to continue the business,” he lamented.

It was gathered that no fewer than 200 makeshift houses and shops were razed by the inferno, with thousands of people rendered homeless. The fire extended to a nearby mechanic workshop on Osholake Street and partly damaged two Sport Utility Vehicles.

According to an eyewitness, efforts made by the different emergency management teams that stormed the place almost immediately helped in curtailing the spread of the fire. No lives were lost in the incident.

The uncontrolled fire was blamed on the fact that the houses were made of planks and other materials, which made the environment easily inflammable. It was gathered that this was about the sixth time the area was being gutted by fire.

The fire was said to have started about 5.30pm when electricity was restored to the area. The fire affected parts of Kadara, Coal and Sholake Streets.

An eyewitness, Tunde Akin, told Daily Sun that there was a spark from some electricity cables followed by thick smoke on Kadara Street. He said the fire spread quickly, defying the residents’ efforts to put it out. The intensity of the inferno was not unconnected with the harmattan, it was gathered.

When the reporter visited the scene yesterday morning, a cloud of smoke still drifted to the sky, even as occupants struggled to pack the remnants of their burnt goods and property.

Refrigerators, television sets, cooking utensils, sleeping foams, cushion chairs and other household items were burnt by the fire. Some of the occupants were also said to have lost physical cash to the disaster.

Ibike pleaded with whoever could come to his aid, to assist him with some capital, to enable him start his business afresh, and to save his family members from the looming hunger.

He said: “I’m not a lazy man and I’m still young. If anybody or the government can help me financially to start all over again, I won’t mind. I already have the customers, who come to patronise me within and outside Ebute-Metta.”

Also affected is Mr. Tunde Olawale, who told the reporter that he had lived in the area since 1992 and had unfortunately witnessed five fire outbreaks. He works as a guard at the local government secretariat.

“I have spent 25 years here. I gave birth to all my five children inside this hut. At the moment, my wife and three of our children are living with me. I was not at home when the fire started, but my wife and the children were able to pack some of our property before the fire spread to our end.

“I pay N1, 500 monthly for the little space that I occupy. There are many landlords here. They collect the money per year and it is based on how large the space the tenant occupies is. Some pay N2, 000 while others pay N2, 500. It is the tenant that will build the place by himself to his or her taste.”

Mr. Gbolahan Tajudeen, who owns a mechanic workshop in which two vehicles were affected, expressed gratitude to God that the SUVs were not completely burnt.

He was also grateful that some youths were around and swiftly helped him push the vehicles away to a safer place.

“If not for the youths, the two vehicles would have been completely gone. If the owners come, I believe they will understand, knowing that the fire didn’t start from my shop,” he told the reporter.

A mosque built in the middle of the settlement was also razed. All that was left standing at the worship centre was a megaphone hung to a pole.

Daily Sun gathered that people from all tribes and religions cohabited in this forsaken slum in Lagos Mainland Local Government Area of Lagos State.  Some people from Togo and Benin Republic, who could not afford to rent a more decent apartment, also stayed in the area.

Also lamenting was a 60-year-old man, Sule Mustapha, who said all that he was left with were the native clothes he wore at the time the fire broke out.

“Everything I had got burnt. It is some people that gave me money to buy food. I don’t have anywhere to sleep today or tomorrow. I could not rent a house outside here because of agent and agreement fees. But here, I only paid N1, 500 to the owner of the land and built a small place, and my wife and I moved in five years ago,” Mustapha said.

Opposite the scene was the Oke-Odo Junior Secondary School, facing Osholake Street, but the government-owned school was not affected by the fire.

One of the victims, who didn’t want his name mentioned, said the emergency teams didn’t arrive the scene on time, even though residents had placed distress calls to them immediately the fire started.

But the spokesperson for National Emergency Management Agency (NEMA), Ibrahim Farinloye told the reporter on the telephone that different response teams got to the scene and succeeded in putting out the fire from spreading to nearby buildings. He said though a lot of damage was done before his team arrived, further havoc was averted.

Farinloye revealed that 57 incidents occurred in the last four days in Ogun and Lagos, claiming five lives and property worth millions of naira. He advised Nigerians to embrace safety consciousness all through the dry season.
at February 22, 2017
Email ThisBlogThis!Share to TwitterShare to FacebookShare to Pinterest