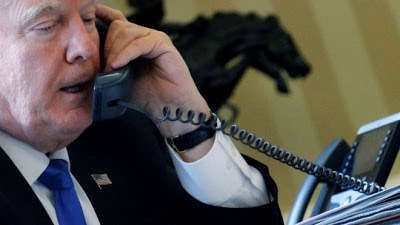 Following wire tapping accusations made against former President Obama, President Donald Trump is asking Congress to look into the Obama administration whether it abused its investigative powers before the 2016 presidential election White House press secretary Sean Spicer said in a statement Sunday:

"Reports concerning potentially politically motivated investigations immediately ahead of the 2016 election are very troubling. President Donald J. Trump is requesting that as part of their investigation into Russian activity, the congressional intelligence committees exercise their oversight authority to determine whether executive branch investigative powers were abused in 2016. Neither the White House nor the President will comment further until such oversight is conducted."

Despite FBI Directory, James Comey, refuting Trump's claims about the claims, the White House has showed no indication that it would back down from Mr. Trump’s claims. In a statement from his spokesman, Mr. Trump called “reports” about the wiretapping “very troubling” and said that Congress should examine them as part of its investigations into Russia’s meddling in the election. 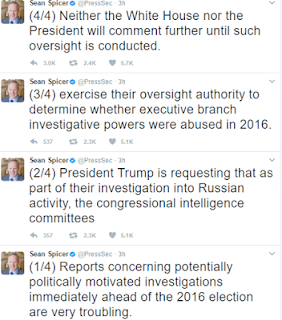 Three Republicans sitting on intelligence committees have said they’d probe Trump’s claims. Rep. Devin Nunes (Republican-California.), chairman of the House Intelligence Committee, said the group will look into the claims as part of its wider probe into Russia’s alleged hacking during the campaign. He said:

“One of the focus points of the House Intelligence Committee’s investigation is the U.S. government’s response to actions taken by Russian intelligence agents during the presidential campaign,” Nunes said in a statement. “As such, the Committee will make inquiries into whether the government was conducting surveillance activities on any political party’s campaign officials or surrogates, and we will continue to investigate this issue if the evidence warrants it.”

Sen. Tom Cotton (Republican-Arkansas.), a member of the Senate Intelligence Committee, acknowledged on “Fox News Sunday” that he’s seen “no evidence” of Trump’s allegations, but he said his colleagues will look into it anyway.

“We are going to review allegations of any kind of improper contacts between Russian officials and campaign officials or other American citizens. I’m sure that we will be reviewing any allegations such as this,” Cotton said.

Sen. Marco Rubio (Republican-Florida.), former Republican presidential candidate, who sits on the same committee, told CNN he was “not sure what it is (Trump) is talking about” but that the committee would “gather the facts.”
at March 06, 2017
Email ThisBlogThis!Share to TwitterShare to FacebookShare to Pinterest