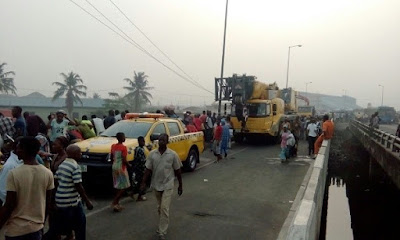 They left Aba, in Abia State, aboard a luxurious bus on a night trip to Lagos on Thursday.
Their wish and expectation was to get to Lagos on Friday morning safe and sound.
Though their prayers was 95% materialising as family members were expecting news of a safe landing, it took a dramatic turn when the unexpected happened.
No fewer than three people have been killed on the popular Ikorodu road on Friday morning.
The accident happened at the Owode-Elede bus-stop, 500 miters from Mile 12.
A LASEMA official, who spoke to Bounce News on condition of anonymity, said the dead have been taken to mortuary at Ikorodu General Hospital.
“The accident happened around 4am on Friday, they luxurious bus was coming from Aba, the driver seemed to have been confused by the bend and partition of the road, and as a result the bus plunged into the river.”
“Three people lost their lives,” he said


The accident caused a terrible traffic jam for motorists coming from Ikorodu to the highland.
at February 17, 2017
Email ThisBlogThis!Share to TwitterShare to FacebookShare to Pinterest