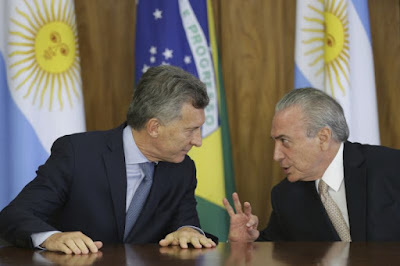 Argentina's President Mauricio Macri, left, talks with Brazil's President Michel Temer during a signing ceremony at the Planalto Presidential Palace, in Brasilia, Brazil, Tuesday, Feb. 7, 2017. Macri is in a one day official visit to Brazil.

RIO DE JANEIRO (AP) -- Brazilian President Michel Temer and Argentine President Mauricio Macri promised Tuesday to reduce trade barriers between their nations, home to the largest economies in South America.
The two met in the Brazilian capital of Brasilia. Without providing details, the leaders said they discussed facilitating trade between their nations, the South American trade bloc known as Mercosur and further integration with other countries such as Mexico.
Macri joked that Brazil and Argentina should only be rivals in sports like soccer.
Both presidents are struggling to jumpstart their struggling economies.
Brazil is mired in its worst recession in decades, which Temer has promised to change in part by enacting unpopular reforms such as slimming pensions.
Macri is trying to tame inflation, which reached around 40 percent last year, and return Argentina to growth after years of stagnation.

at February 07, 2017
Email ThisBlogThis!Share to TwitterShare to FacebookShare to Pinterest