"The future is Female" 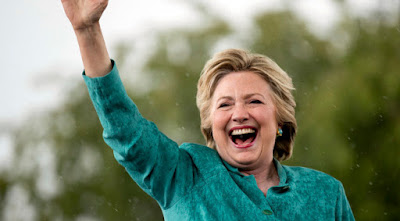 Hillary Clinton may have lost the presidential election, but she’s still advocating for one of her campaign’s core tenets — increasing opportunities for women and girls.
In her first video statement since President Trump’s inauguration, Clinton cited the historic Women’s March on Washington as evidence of her belief that “the future is female.”
“Despite all the challenges we face, I remain convinced that yes, the future is female,” Clinton said. “Just look at the amazing energy we saw last month as women organized a march that galvanized millions of people all over our country and across the world.”
The video was made for the 2017 Makers Conference, an invitation-only work conference being held Monday to Wednesday at the Terranea Resort in Rancho Palos Verdes, Calif. The event organizers bring together hundreds of female leaders to celebrate the accomplishments of women and inspire young women to become “the leaders of tomorrow.”
In the video, Clinton expressed her support for Makers’ mission to share “women’s stories and celebrate women’s vital roles in the past, present and future of our country.” She said it’s more important than ever for women to focus on the theme of this year’s conference: “be bold.”
“We need strong women to step up and speak out,” she said. “We need you to dare greatly and lead boldly. So please, set an example for every woman and girl out there who’s worried about what the future holds and wonders whether our rights, opportunities and values will endure.”
Gender politics were front and center during the hard-fought presidential campaign. Clinton was the first woman to become a major party’s presidential nominee, and polling suggested that she was poised to become the first woman elected to the U.S. presidency. Despite easily winning the popular vote, Clinton ultimately lost the election to Trump, whose late-stage campaign was plagued with accusations of sexual misconduct.
The resulting outcry among liberal women and like-minded men culminated in the Woman’s March on Washington and many sister marches across the globe, which drew an estimated 4.9 million participants worldwide.
Clinton ended her video echoing a memorable moment from her concession speech in which she told girls to never doubt themselves.
“And remember you are the heroes and history makers, the glass-ceiling breakers of the future. As I’ve said before, I’ll say again, never doubt you are valuable and powerful and deserving of every chance and every opportunity in the world.”
To see video follow the link below:
https://youtu.be/Hvdp9jiUA9I
at February 07, 2017
Email ThisBlogThis!Share to TwitterShare to FacebookShare to Pinterest