France Is Training Eagles To Take Down Drones To Fight Terrorism 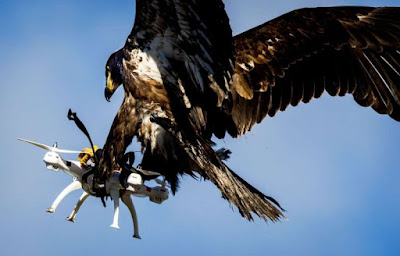 The French military is developing a new, unusual defense weapon to combat terrorism. Four golden eagles, d’Artagnan, Athos, Porthos and Aramis are being trained to attack drones that enter into restricted French air space according to the Washington Post.

Terrorists are beginning to experiment with drones in Iraq and the French presidential palace has had numerous drones fly within its restricted air space in recent years. Terrorists are reportedly using store bought drones and turning them into weapons. Jean-Christophe Zimmermann, a French air force general, told Reuters the military chose to use eagles for defense to avoid using guns.

If a drone appears in a crowded area, using guns to bring it down becomes extremely risky. A properly trained golden eagle poses no threat to humans and can take down the enemy drone in a safe way. Due to the recent terrorist attacks in France, officials are experimenting with protection mechanisms that are not as life threatening to humans as weapons.

About a year ago, the four eagles were placed on top of a drone to hatch and kept there during the early feeding period. As soon as the eagles began drone-defense training, they were rewarded by eating meat attached to the top of a drone. Everything they have been exposed to is anti-drone oriented.

Earlier this month, d’Artagnan was in a French military control tower and spotted a practice drone 200 meters away. The bird covered the 200 meters in 20 seconds and rammed into the drone, causing it to fall into the grass.

The eagles will be equipped with special equipment on their heads and talons to prevent any damage a drone could do to their body. The use of eagles to take down drones was first used by Dutch police last year, according to the Washington Post.

The French Air Force have already ordered a second set of eagles to train. Eagles are known as ferocious attackers and are extremely powerful. Peter Nye, an employee of the New York Department of Environmental Conservation told Journey North in a Q&A session that eagles can fly up to 50 km/hr and have four times better eyesight than humans.

The grip of an eagles talons is 10 times stronger than that of an adult human. While the decision to officially use eagles as a defense mechanism is still a few months away, the training is going to be elevated. “Soon they will be casting off from peaks in the nearby Pyrenees Mountains,” said a French air force commander in an interview with Agence France-Presse.
at February 23, 2017
Email ThisBlogThis!Share to TwitterShare to FacebookShare to Pinterest