For years, Russia has been seen by some as a major source of fake news. Now Moscow wants to get into the truth squad business.

On Wednesday, the Russian Foreign Ministry launched a new initiative on its website: “Examples of publications, retranslating false information about Russia.”

Here is how the Russian Foreign Ministry debunks the fake news: 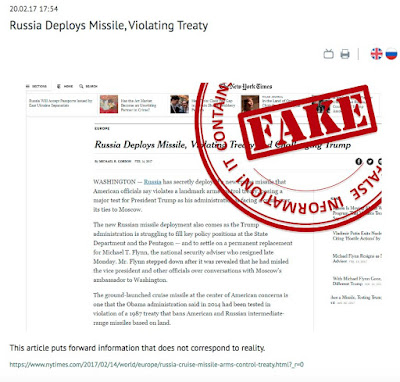 The article in question is presented in a screenshot, and then plastered with a red stamp reading, “Fake. It contains false information,” with a line below reading, “This article puts forward information that does not correspond to reality.”

Rather unhelpfully, that’s it — there is no effort to specify in what way the article’s information corresponds or not to reality. (Some Western efforts to correct misleading claims made by Russia are rather more information-packed. NATO, for example, offered point-by-point rebuttals of Russian claims after Moscow’s 2014 invasion of the Ukraine.)

At a Wednesday briefing, Russian Foreign Ministry Spokesperson Maria Zakharova said, “We don’t expect there to be a shortage of material for this section.”

At time of writing, however, there were but five articles, including a piece by the Santa Monica Observer titled, “Vitaly Churkin 5th Suspicious Death of Russian Diplomat in 3 Months.” (The Russian U.N. ambassador did, in fact, die on Monday.)

The term “fake news” has made real news for the past several months, and has been levelled by everyone from BuzzFeed about factually inaccurate stories made up by Macedonian teenagers, to newspaper editors upset at criticism of their coverage, to President Donald Trump, who confusingly labels as “fake” negative stories based on real leaks. (“The leaks are real, but the news is fake,” he clarified.)

The phrase “fake news” has now lost so much of its meaning that the term, to use the Russian Foreign Ministry’s parlance, no longer corresponds to reality.
at February 23, 2017
Email ThisBlogThis!Share to TwitterShare to FacebookShare to Pinterest