A RUSSIAN spy ship has moved 40 miles closer to a US naval base and is “loitering” around the coast, according to defence officials. 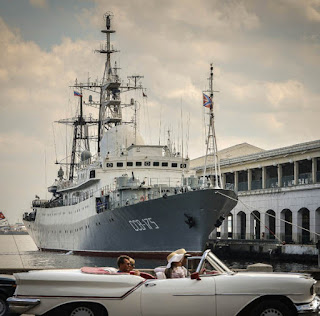 The SSV-175 Viktor Leonov is now just 30 miles south of Groton, Connecticut, having been first spotted 70 miles off the coast of Delaware yesterday, heading north at 10 knots.

The town of Groton is home to a major naval base and “home of the submarine force”, being the primary east coast submarine base for the US.

US waters extend 12 miles from the coast.
The vessel was described by one US official as “loitering” in the water just south of Montauk on the eastern tip of Long Island.

Lt Col Valerie Henderson, a Defence Department spokeswoman said: “We are aware of the vessel’s presence. It has not entered US territorial waters.

“We respect freedom of navigation exercised by all nations beyond the territorial sea of a coastal state consistent with international law."

The spy ship is armed with surface-to-air missiles, but its main function is to intercept communications and collect data on sonar capability.

In the past, Russian spy ships have loitered off the coast of Kings Bay, Georgia, which is home to a US Navy ballistic missile submarine base.

The ongoing incident is the first such test by Russia of US military responses under President Donald Trump and comes after the White House national security adviser Michael Flynn was forced to resign amid controversy over his Russia contacts.

The Russian ship went into service in the Black Sea in 1988 before it was transferred seven years later to the northern fleet and was based in the Barents Sea in the Arctic.

With a crew of about 150 to 200 military personnel, the 310ft Viktor Leonov can reportedly transmit data back to superiors via onboard antennae linked to satellites orbiting earth.

For self-defence the ship - along with six other similar Vishnya class spy vessels - is said to be armed with two AK-630 rapid-fire guns and two missile launchers.

It was named after Viktor Leonov - a Soviet sailor in the Second World War who was awarded two Hero of the Soviet Union medals.

Officials at the Pentagon believe the ship will eventually sail south along the US coast and return to the Caribbean.

US Senator Chris Murphy, a Democrat from Connecticut, expressed concern over the ship's presence.


He wrote on Twitter: "Russia is acting like it has a permission slip to expand influence, test limits of reach. Questions are obvious: does it, and if so, why?"
at February 16, 2017
Email ThisBlogThis!Share to TwitterShare to FacebookShare to Pinterest