Obasanjo "The saddest day of my life"

Abeokuta—FORMER President Olusegun Obasanjo has described the day he appeared before the General Patrick Aziza’s Special Military Tribunal over allegations of coup plotting as the saddest day in his life. 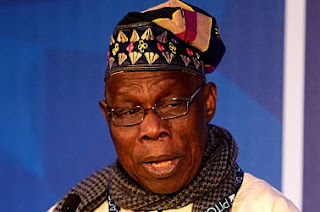 Speaking during a special Valentine’s Day devotion at his Hill Top residence in Abeokuta, Ogun State, Obasanjo affirmed God’s partiality towards him when he was moved from prison to the presidential palace.

“My saddest day was when I sat in front of a military panel set up by late former Head of State, General Sani Abacha, to try me over a phantom coup, and sentenced to death and later commuted to 30 years imprisonment,” Premium Times, the online newspaper, reported him as saying.

Noting how he had a period of introspection after he was convicted by the Aziza tribunal, the former president was quoted as saying that he surrendered the matter to God.

“God has always been giving me immense favour beyond my own expectations and what I deserve from Him. And I used to tell people that God has been partial to me from childhood,” the three-time Nigeria leader, who read from the book of Isaiah 45:1-4 during the service, was quoted as saying.

He also pointed out the leading role played by former United States president, Jimmy Carter, in piling pressure on the Sani Abacha regime to commute the sentence from life imprisonment to 15 years.

He was quoted to have said that had Abacha lived, he would have spent at least 10 years in prison. Noting what he described as a sort of national agitation that catapulted him from prison to the presidential palace as part of the ironies of life for one born into a humble background, he said:

“I was born in a village and anybody born in that village would have concluded that the popularity of those born there would not go beyond the next village. My parents were complete illiterates.”

He encouraged his guests that they would always overcome the challenges of life, if they were close to God. Obasanjo served as military head of state between February 14, 1976 and October 1, 1979 and was inaugurated as civilian president at the onset of the Fourth Republic on May 29, 1999 and won re-election to serve a second term and handed over on May 29, 2007.


at February 16, 2017
Email ThisBlogThis!Share to TwitterShare to FacebookShare to Pinterest