The residents of Gowon Estate, near Egbeda, protesting a three-week-old power outage slammed on them by  Ikeja Electricity Distribution Company (Ikeja Electric), on Monday disrupted the company’s operations at Akowonjo Business Unit. 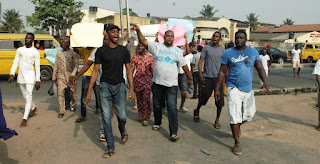 The residents prevented movement in and out of the unit’s premises over the blackout, allegedly occasioned indebtedness by military quarters.

The protesters bearing placards that asked the electricity company to restore their light immediately, chanted solidarity songs. Inscriptions on some of the placards read: “IKEDC, restore our light immediately’’ and “We can’t continue to suffer for the sins of others’’.

Others are: “Stop punishing us because some people owe; this is wickedness’’, “ Restore light to our feeder’’ and “ We cannot suffer because of others’ indebtedness’’.

Mr David Ogunbor, President of the Estates Youth Movement, described the development as “injustice’’. Ogunbor, who led the protest, said: “This protest is all about Ikeja Electric punishing us because the military quarters in the estate is owing them bills.

“Ikeja Electric is punishing the whole estate residents because of a minority. We say no to this. “If people owe, there should be a better way to recover the money and not by punishing us for the sin of other people.

“For about three weeks now, there has been no light whereas areas the estate’s environs have normal supply. We are being punished wrongly. “Let the company restore our light with immediate effect and find ways of recovering money from its debtors. They can’t do that to the military quarters if civilians were the ones owing. It is not right.’’

Ogunbor also said the residents had contacted the management of Ikeja Electric and were told that power would not be supplied to the area until the military quarters paid. He said the community had suffered a lot following the development, adding that many residents spend huge money on fuel for their electricity generators.

According to him, petty businesses have been adversely affected. Another youth, Frank Eke said: “We are being punished for no just cause. How would the military owe and Ikeja Electric disconnects us because we use the same feeder? “It is unjust. We want our supply restored, I spend about N3, 000 everyday on fuel for three weeks now.

“Spending money on fuel after we have recharged our prepaid meters is bad in this period of recession,’’ Eke said. An elder in the community, Mr Jossy Amodu, said that any issue with the military quarters should not be passed on all residents. He, however, pleaded with the electricity company to settle its issues with those indebted to it and stop punishing other residents.

Amodu urged the management of Ikeja Electric to separate the military from the feeder that supplied the entire estate. According to him, there is no justification for consumers to purchase huge credits on prepaid meters without getting supply.

A trader, Mrs Ronke Fausa, said the development had made her to lose huge amount on frozen foods and caused so much discomfort for her children. “My children are now suffering from rashes due to heat. This outage by Ikeja Electric has cost me so much because some people are in debt for power consumed,’’ she said. Philip Origbo, a student said: “The situation is bad and funny. It is not right, we are calling for justice.’’ Also, Alhaja Ramat Olayinka said: “We are showing our displeasure with the treatment being meted out to us by Ikeja Electric.

“The problem has been that one arm of the Nigerian Armed Forces is indebted to Ikeja Electric and instead of seeking other ways to recover the debt it disconnected us for almost a month. “This is not acceptable. It has been difficult for us. Business owners have lost a lot,’’ she said. Chief Dickson Agbi, Life Patron of the Residents Association, pleaded with the company to settle any grievances it has with their debtors.

Agbi said: “We are law abiding citizens, we would not want Ikeja Electric to put its hands in our mouths, if they do, we will bite’’. Addressing the protesters, Mr Sunday Asha, the Distribution Manager of the company, said that the company would address the situation and restore supply to the estate. Asha said: “We have listened to you and we will resolve the issue.

We want you to be peaceful and leave while we address the issue. “We will convey your grievances to our head office and the management will resolve it. We will get back to you. We are always concerned about our customers’ plight’’.

The aggrieved protesters had insisted that they would not leave the premises until power was restored to the estate but they were persuaded by their leaders to retreat.


at February 14, 2017
Email ThisBlogThis!Share to TwitterShare to FacebookShare to Pinterest