The leader of the Biafra Zionist Federation (BZF) who was just released from prison, Barrister Benjamin Onwuka, has declared that the south-east would become independent on March 15, 2017. 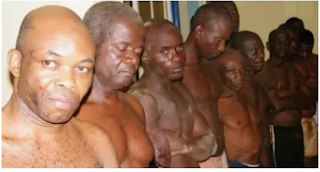 On that day, he said, the Republic of Biafra would be born.

Onwuka had been in detention for three years following his arrest midway into his live broadcast to declare the Biafran independence at the Enugu Broadcasting Service which he stormed and took over.

He added that this stand was strengthened by the diplomatic relations the BZF had established with America, the Great Britain and other western powers.

Daily Post quotes him as saying: “The state of Biafra will be announced on March 15, 2017 by the Zionist Federation. I, Ikedi Benjamin Onwuka will be leading Biafra. I will be the president of Biafra.

“The work we have done underground permits that America will endorse the Independent state of Biafra in March 15, 2017; we expect that this will come with the endorsement of President Donald Trump.”

Claiming that former President Barrack Obama of the United States of America had approved the policy for an independent state of Biafra on October 15, 2014, he added that current President Donald Trump would have to implement the action since a sitting president in America usually do not ignore foreign policies established by their predecessors.

He was further quoted as saying: “My confidence on President Donald Trump endorsing the restoration of an Independent state of Biafra hinges on the fact that ex-President Barack Obama made the approval.

Concerning the friction that exists among the secessionist groups in Igboland, he said: “There will never be a day when all the pro Biafra groups will agree on every issue but the ‘Zionists’ have taken the upper hand because we established diplomatic ties with America, Great Britain and other world powers.

“The MASSOB, the IPOB and others are under the zionists; the IPOB for instance has never gone beyond River Niger.

“All that Nnamdi Kanu is doing is to be insulting everybody through his radio; he is not even sparing America and Britain. So, you can even see that his actions are inimical to the Biafra dream.

“The mistake our leaders made in 1967 was based on the fact that they failed to establish diplomatic relations with Russia, America and Great Britain.‎ Nnamdi Kanu is still toeing the same line.”

According to him, the new Biafran territory stretches beyond Igbo land and Niger Delta regions as it includes Kogi, Benue, Nasarrawa states and most parts of the middle belt.

“Also the maligned and maltreated people of Southern Kaduna, several enclaves within the Federal Capital Territory, FCT, Abuja, including Seme Boarder in Lagos state to parts of Cameroon are part of us.

“It is going to be a Biafra nation for all. The Igbo tribe will not dominate the Ijaw or Igala tribe. There will be no discrimination.

“It will be a government of all. No person or region will have an upper hand. There will be free press. It is the bedrock of democracy.

“All those who died in the struggle will not be forgotten. Those who laid down their lives in the Biafra struggle paid the highest price. We would look for their families and take care of them,” Onwuka reportedly said.

at February 15, 2017
Email ThisBlogThis!Share to TwitterShare to FacebookShare to Pinterest