Special forces and police try to retake the airport and a nearby military base to push into the west of the militant-held city. 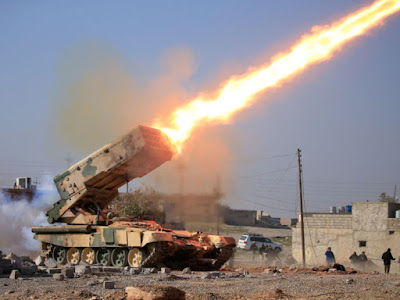 US-backed Iraqi forces have fought fierce battles with Islamic State fighters as they try to retake control of Mosul's main airport from IS.

The assault, backed by jets, drones and gunships, is part of the ongoing campaign to retake full control of the city from the jihadist terror group.

Iraqi police forces attacked the disused airport, on the southern approach to the city, which they want to use as a base to launch a final onslaught on the west of Iraq's second-largest city.

Sky's Alex Rossi, who is reporting from outside Mosul, said an Iraqi colonel told him their forces are inside the perimeter of the airport and pushing into the international airport buildings, but they are still coming under fire from extremist fighters.

However, the officers believe they should be able to take the airport within the next 24 hours.

Earlier Alex told us how the attack on IS placements began: "All morning we've seen helicopter gunships flying over strafing those positions with rockets."

Special forces led the assault on the Ghazlani military base adjacent to the airport, moving in from the south and engaging extremists in fierce fighting near the edge of the site.

As usual, the advance was slowed as engineers - with special forces troops - had earlier cleared roads and removed IEDs (improvised explosive devices).

The battle for that part of the city is expected to be especially difficult, as the old, narrow streets mean forces will need to leave the protection of their military vehicles and engage in close-quarters fighting.

The operation is likely to be complicated by the terror group's use of IEDs and the estimated 750,000 civilians still living there.

Aid organisations had feared an unprecedented exodus before the start of the fighting in the east four months ago but a significant majority of residents stayed at home despite reporting very difficult living conditions and low food supplies.

Mosul is roughly split in half by the Tigris river, with government forces winning back control of the east in January following months of fighting.

Bridges across the Tigris have now been destroyed by IS and the jihadists in the west are all but besieged.

100,000 Iraqi troops, alongside Kurdish fighters and Shi'ite militias, are involved in the campaign to retake the city where IS declared its self-styled caliphate after sweeping into vast areas of Iraq and Syria in 2014.
at February 23, 2017
Email ThisBlogThis!Share to TwitterShare to FacebookShare to Pinterest