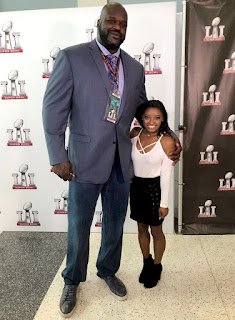 On Sunday, millions of Americans tuned in to watch Super Bowl LI but there are a few lucky stars who snagged a ticket to watch the Big Game from the actual stands.
Of course, they aren’t the only big names in the building — there are a few famous faces that will be taking center stage at Houston’s NRG Stadium. Country star Luke Bryan sang the national anthem, marking the first time in decades that a male singer has performed the challenging song ahead of the Big Game. Of course, he isn’t the only star during the Super Bowl’s roster of entertainment — Lady Gaga will be performing during the halftime show, marking the first time she has headlined the highly coveted gig. (She’ll be bringing along her frequent collaborator Tony Bennett along for the ride as well.)
Simone Biles and Shaq had a run-in at NRG Stadium ahead of the game, leading to an epic photo opportunity for the Olympian.
Biles is a fan of standing next to tall athletes — she famously squared off against Michael Phelps at the Olympics last year.
Biles and Shaq weren’t the only stars at the game — Atlanta fans T.I. and Usher snagged tickets while Boston’s own Mark Wahlberg was on-hand to root for his favorite Patriots.
There’s also the famous football fans that are watching the Super Bowl from the comfort of their home (or, in some cases, pigskin-themed party).
Keep reading to see who was watching when the New England Patriots took on the Atlanta Falcons.
at February 06, 2017
Email ThisBlogThis!Share to TwitterShare to FacebookShare to Pinterest