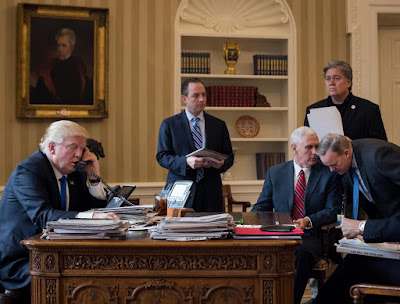 US news coverage has been dominated by unconfirmed allegations members of The US President's campaign team were in contact with the Kremlin - a claim denied by Moscow.

Mr Trump has suggested that his own intelligence agencies were illegally feeding classified information to journalists, deepening a dispute that started with last year's findings over Russian interference in the election.

It came months after he told supporters in Pennsylvania "I love Wikileaks", having previously "sarcastically" called on Russia to hack and publish Ms Clinton's emails, during the presidential campaign.

As the controversy has rumbled on, a White House source has described the "borderline chaos" at the heart of Mr Trump's administration.
“Some staff are in survival mode," they told the Axios website, adding that they are "scared to death".

Another West Wing insider added that the current situation “leads back to the fact that nobody is in charge."
Mr Trump’s former national security, Michael Flynn, resigned earlier this week after admitting that he gave “incomplete information” to Vice President Mike Pence over phone calls to the Russian ambassador in December.

It later emerged that Mr Trump had been warned by former attorney general Sally Yates about Mr Flynn’s conduct and had failed to act on it.

Fresh allegations of repeated contact between members of Mr Trump's team and Russian intelligence officials during the US election campaign, later emerged.

The New York Times reported that American law enforcement and intelligence agencies found “repeated contacts” between Mr Trump’s campaign staff and associates and senior Russian intelligence operatives in the year leading up to the the presidential vote.
at February 16, 2017
Email ThisBlogThis!Share to TwitterShare to FacebookShare to Pinterest