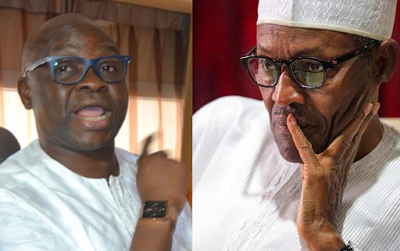 Ekiti state governor, Ayo Fayose, has asked President Buhari to speak with him to prove that he is indeed healthy. President Buhari who has been in the UK for over a month now, has been speaking on the phone to some APC governors, Foreign presidents as well as some of his media aides.

In a statement released by his Chief Press Secretary media aide, Idowu Adelusi, Fayose gave out a phone number he could be reached at.

”I advised the President to speak with me for the purpose of convincing Nigerians that he is hale and hearty instead of looking for people outside the country to convince Nigerians.

Since they are eager for the president to speak to people; believing in this way to convince Nigerians that their President is hale and hearty, let President Buhari talk to me.

I can be reached on 08035024994. I am credible and Nigerians will believe me. They said he spoke to President Donald Trump. Despite the hype, Nigerians were skeptical.

Then they said he spoke to the king of Morocco; again, Nigerians were suspicious. Before we recovered from that, it is now the AU president that they said President Buhari spoke to. A president that can speak with outsiders should be able to whisper or wave to his own people.

The people gave him the very important platform of President on which he stands today and, therefore, Presidential aides should stop giving the unhelpful impression that Buhari has no respect for the Nigerian electorate".
at March 06, 2017
Email ThisBlogThis!Share to TwitterShare to FacebookShare to Pinterest