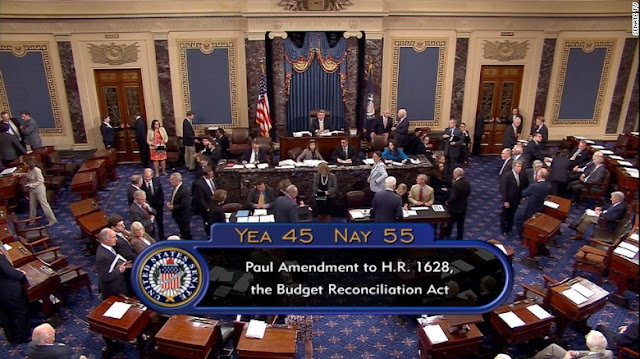 The vote was 45-55, with seven Republicans opposing the measure.

The failed effort was a remarkable contrast from less than two years ago, when a Republican-controlled House and Senate passed an identical measure and sent it to Obama. He vetoed the bill.

In 2015, the passage of that legislation was largely viewed as a political messaging exercise: GOP lawmakers were keenly aware that Obama would not sign it into law.

But now, with Republican President Donald Trump in the White House and ready to sign a bill, the stakes are real -- as are the realities of voting to repeal the current health care law without a replacement in place.

The failure crystalized the new reality for Republicans: more than seven years after the enactment of Obamacare, there is growing recognition within the GOP that a straight repeal of the law is not viable.

Later Wednesday, Senate Minority Leader Chuck Schumer said Democrats will not offer any more amendments on health care until they know what the final bill will be.

"I'm for repeal and replace and we're going to continue to work on replacement," Portman, R-Ohio, said after the vote.

"I didn't think repeal only was appropriate because it didn't provide for those people who are stuck in the status quo."

The proposal would have significantly gut the Affordable Care Act by repealing its unpopular individual and employer mandates, ending Medicaid expansion and rolling back a slew of the law's taxes. The repeal would not go into effect for two years -- a "transition period" during which Republicans would draft a replacement plan.

The Congressional Budget Office estimates the proposal would result 32 million more uninsured over the next decade.

Three-quarters of the nation would live in areas with no insurers participating in the individual market by 2026, CBO said, leaving many without an option if they do not have employer-provided or government health insurance, such as Medicare or Medicaid.

The vote came during the Senate's second day of a marathon debate to dismantle Obamacare, with Republican senators continuing painstaking deliberations to reach an ultimate agreement on health care reform.

Senators were initially scheduled to vote on the 2015 repeal measure around mid-day, but that plan was unexpectedly delayed until later in the afternoon. According to a Democratic aide, the holdup was over language in the amendment about Planned Parenthood, and whether it passed the so-called "Byrd Rule," which determines what language is permissible under the budget reconciliation process.

Senate Majority Whip John Cornyn described the snafu to reporters as a "kerfuffle" and said that there was a need to make "arguments to the parliamentarian."