A transgender Navy SEAL who was the focus of a CNN documentary, "Lady Valor," says President Trump's tweets were a disrespectful way to announce new policy and that the administration is sending unclear and ominous signals about its approach to liberty itself. 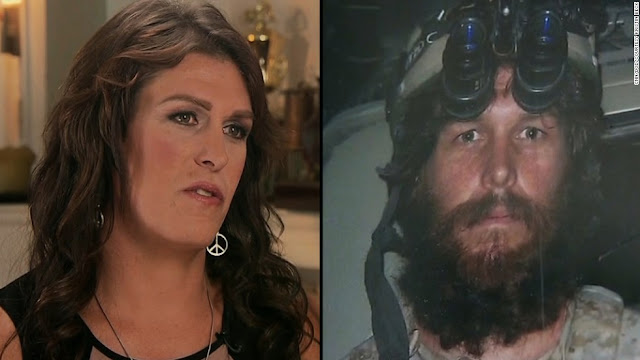 Kristin Beck served as a Navy SEAL for more than two decades. Then named Chris Beck, she deployed in Iraq, Afghanistan and Africa and earned a Bronze Star and Purple Heart. She came out as transgender after leaving the military in 2011.

In the last months of President Obama's administration, the Defense Department initially approved a policy, still under review, that would allow transgender Americans to serve openly in the US military. On Wednesday, after President Trump's announcement of a reversal of that policy on Twitter -- stating that "the United States Government will not accept or allow Transgender individuals to serve in any capacity in the U.S. Military" -- Beck spoke with CNN Opinion's Jane Carr about what this means for transgender Americans and what comes next for those currently serving or who aspire to serve.

This interview has been edited lightly for clarity and flow.
CNN: As someone who served, what was your first reaction to the news of the President's tweet? What were your first thoughts?

Kristin Beck: The first thought was, why would you tweet that? Why not have a press conference?

There are a hundred different ways to make an announcement that are better than a tweet. It blindsided millions of people. It's disrespectful. He needs to figure something else out as far as how he communicates with the public.

As for the message itself, you (the Defense Department and by extension, the commander in chief) gave all the people in uniform a safe space to come out and be free and live as we say Americans do, free and brave, and now you're going to bomb that safe area? It's disturbing.

So now you're going to end up with thousands and thousands of people who are now going to have their contracts broken -- and I think we can definitely consult some contract lawyers on this, talk about expensive! This is going to cause repercussions that I'm not sure they (in the Trump administration) have really taken a close look at.

You have to consider also, retention of all the people in uniform and recruitment of all the people who are coming in. Even if you clarify that this only affects recruitment, and we can work on that at a later time, you still have the issue of retention of people who are already serving. You can say, "You guys are good. You're still safe. You're gonna stay safe." Or, are you going to bomb us, too?
Those are the questions. There are a lot of questions. The President raises way, way more questions than he gives answers.

CNN: What would you say to transgender men and women currently serving in the military or the ones out there who may aspire to serve?
Beck: I would say to those people who are transgender, out, and serving to just let the dust settle a little bit.

I'd rather not have to go down this long, difficult road of broken contracts and broken promises.
In one word, what would you say America is? For me personally, I would say that one word is liberty. And with that one tweet, he's taken away my liberty and the liberty of a lot of other people.

He's taken away from thousands and thousands of people the right to personal liberty. That's not the American way.

CNN: If you could speak to the President right now or in the coming days, what would you say?
Beck: I'd say his famous line: "You're fired." As the American people, we can say that (to all our elected officials). And in 2018, we can put out in a big loud voice, "You're fired." By how you vote. And again in 2020, I will say again, "You're fired" by how I vote and how all of us vote. If he continues to do this to people -- you know, I'm a human being. I deserve dignity and respect. I'm an American. I deserve freedom, and a life of happiness and liberty. And if you, as the President, continue down this road of stripping and dismantling freedom -- you know, he's doing this through so many other ways, he's doing it on immigration, too -- then, "You're fired." And we do that through the polls. And we do that through grass-roots lobbying. We're going to make a lot of noise.