As Dodge continues its weekly teases of what will likely be the world’s fastest muscle car (taking the throne of the 707-hp Dodge Hellcat),  a couple of things have been revealed about the Demon. 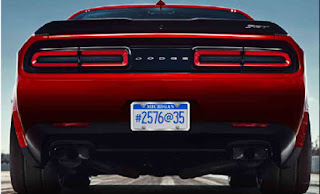 First, the Dodge Demon (which is owned by Fiat Chrysler ( FCAU) ) will be the first-ever factory production auto with street legal drag tires. As a result of the extra wide treads, the Demon will sport some aggressive-looking side fenders. It will cburn out 900 horsepower.

The Demon — and all its wonderful specs — is scheduled to be unveiled at the New York International Auto Show in April. Meanwhile, the Demon will weigh about 215 pounds less than a Hellcat, reported Motor Authority.

A Hellcat weighs in at about 4,448 pounds. To cut the weight, Dodge has reportedly removed the passenger front seat and rear bench seat.

Dodge has also introduced the Demon Crate, a special equipment pack that turns the car from a regular street ride into an all-out drag-strip demolisher.

Dodge claims the crate will boast 18 parts that set the car up for the drag strip, including performance parts, track tools, spare wheels and something it calls the “Demon Track Pack System.”
at February 13, 2017
Email ThisBlogThis!Share to TwitterShare to FacebookShare to Pinterest