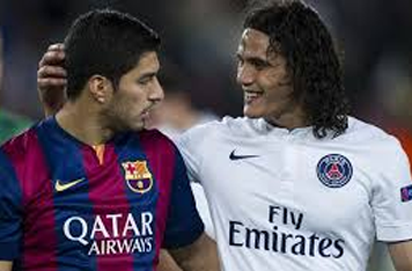 Cavani and Suarez head to head

Born in the same Uruguayan city of Salto just one month apart, Luis Suarez and Edinson Cavani have gone on to become two of the world’s leading strikers and will go up against each other when Paris Saint-Germain face Barcelona on Tuesday. When asked about his relationship with Suarez ahead of the game on Monday, PSG hotshot Cavani described the Barcelona man as his friend but insisted the two are very different attackers.

“Luis is very physical, he uses his body a lot. I am different, I don’t move as much as him,” said Cavani, who will celebrate his 30th birthday on the day of the UEFA Champions League last 16, first leg at the Parc des Princes.


Goal-scoring record for Barcelona: 109 goals in all competitions; 25 in all competitions this season (18 in La Liga, 2 in Champions League, five in other tournaments)
at February 13, 2017
Email ThisBlogThis!Share to TwitterShare to FacebookShare to Pinterest