Coutinho crowned Best Brazilian footballer in Europe ahead of Neymar 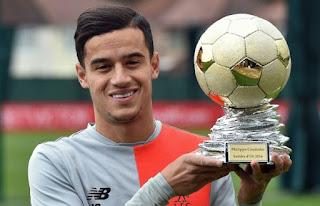 Liverpool playmaker, Philippe Coutinho, has been announced as the winner of the Samba Gold award.

The 24-year-old won the prize ahead of Barcelona forward, Neymar Jnr.

Coutinho enjoyed a brilliant 2016, where he struck 18 goals for club and country.

“It was a good year. As a team, we played very well and we managed to get to two finals.

“Unfortunately, we did not win the finals win, we lost. That was a very difficult time for us to deal with the defeat [to Sevilla] but this certainly made the group stronger.

“We started the season very well, at a high level. We all played very well, so, of course, 2016 was a good year. In the end I got injured, I missed a few games at the end of the year, but it was a positive year.”
at February 24, 2017
Email ThisBlogThis!Share to TwitterShare to FacebookShare to Pinterest