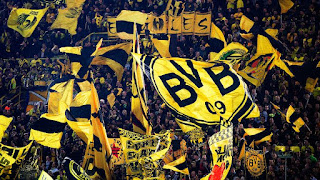 Football is a game of love not violence!

On 4th of February 2017 DORTMUND, Germany (AP) — Borussia Dortmund "deeply regrets" attacks against Leipzig supporters including women and children before the sides' Bundesliga game on Saturday evening.
Dortmund police filed 28 charges for breaches of the law concerning explosives, assault, dangerous bodily injury, damage to property and theft after Leipzig supporters were pelted with stones and cans by Dortmund fans as they approached the stadium. Four police officers and a police dog were injured, the police said in a statement
"Dortmund strongly condemns this violence," the club said on its website Sunday.
Dortmund police said they were forced to use batons and pepper spray to prevent the situation from escalating.
"All-in-all, extreme aggression and readiness for violence could be established among the Dortmund fans against the visitors. This was directed against any person who could be identified as a Leipzig fan, regardless of whether they were small children, women or families," the police said.
Dortmund said it was working with police to deal with the incidents, and it wished injured Leipzig fans a speedy recovery.
Dortmund won the game 1-0 thanks to Pierre-Emerick Aubameyang's first-half header to go third behind Leipzig.
at February 05, 2017
Email ThisBlogThis!Share to TwitterShare to FacebookShare to Pinterest