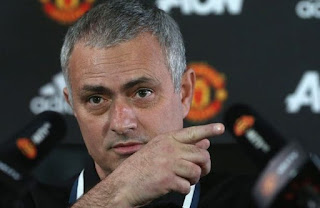 Manchester United boss, Jose Mourinho says they have been given a “bad draw” in the Europa League, after being handed a trip to Russia to play FC Rostov.

The last-16 tie means United will make a round trip of nearly 4,000 miles.

And the first leg will be played four days before Mourinho returns to Chelsea for FA Cup quarter-final clash.

“It’s a bad draw in every aspect,” Mourinho said during his press conference on Friday.

“It’s far and comes in a very bad period for us, and is difficult because they’re a very difficult team.

“They had a very good Champions League campaign.

“They beat Ajax and Anderlecht in the play-offs and in the group phase managed good results against Bayern Munich and Atletico Madrid.

“They got third position, leaving PSV Eindhoven out.

“I know their manager well and played him when he was at Ruben Kazan and I was at Inter.

“So it’s a very difficult team, a very physical team, so a bad draw, but after we play Southampton and Bournemouth, we focus on it and go for it.”

United play the first leg away on March 9 and the second leg at Old Trafford on March 16.
at February 24, 2017
Email ThisBlogThis!Share to TwitterShare to FacebookShare to Pinterest