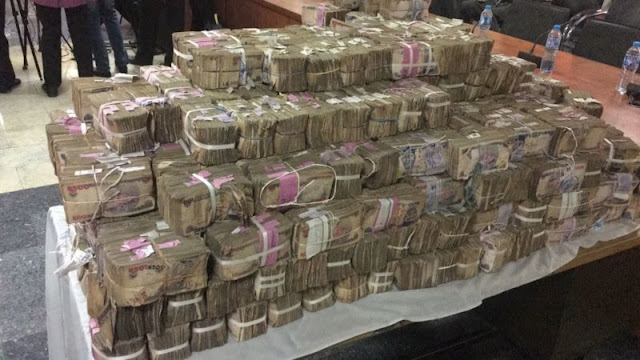 The panel constituted to investigate the electoral and other offences perpetrated during the Dec. 10 Rivers Parliamentary re-run election, has alleged that it recovered N111 million from 23 INEC officials.
The Chairman of the panel, Deputy Commissioner of Police, Damian Okoro, made the allegation while presenting the team’s report to the Inspector-General of Police, Ibrahim Idris, in Abuja on Tuesday.
He alleged that three senior electoral officers collected N20 million each out of the N360 million given to them by Gov. Nyesom Wike of Rivers, while the remaining officers received N15 million each.
Okoro further alleged that there were some cases of misconduct on the part of some electoral officers, who were compromised in the line of duty.
“By this investigation, this panel has diligently unraveled what went wrong with the re-run election in Rivers, the details of which are contained in the report.
“We discovered that failure of leadership and followership rather than law enforcement was responsible for the political upheaval in the state,” he said.
He added that the task given to the panel was challenging because of the tense political and security atmosphere in the state.
The chairman said that lawless elements targeted political opponents of their sponsors, and law enforcement agents, especially the police.
He attributed some of the violent acts to inflammatory statements by some narrow-minded politicians.
“Apart from their utterances, politicians in their desperation for power, also armed thugs who unleashed terror on their opponents,” he said.
He said that six police officers, who were indicted, had been tried and dismissed from the force.
Speaking, the inspector-general of police, said that a report and recommendation would be forwarded to the Attorney-General and Minister of Justice for his advice.
He said appropriate action would be taken against indicted persons to serve as deterrent.
“We are going to take appropriate action in conjunction with other security agencies to put an end to this problem,’’ he said.
He urged Nigerians to have confidence in the security agencies and believe the panel report.
Idris alleged that Wike refused to cooperate with the panel even when the team visited him in Port Harcourt.
He said that the investigation would go a long way toward ending electoral malpractices in the country.
“We will be failing in this country if we allow this to continue,’’ he said.
He said that the money recovered would be paid into government coffers.
It will be recalled that the I-G on Dec. 22, 2016, constituted a 15-man special joint investigation panel to investigate electoral and other offences in respect of the Dec. 10, 2016 re-run election in Rivers.
The membership comprised 12 police officers and three officials of the Department of State Services.
The panel was, among other things, mandated to thoroughly investigate the various infractions, incidents and violence that marred the election.
at February 07, 2017
Email ThisBlogThis!Share to TwitterShare to FacebookShare to Pinterest