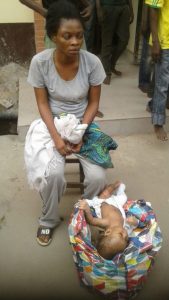 The naked baby who was packed inside a bag, was rescued by operatives of the Lagos State Task Force while his 18-year old mother, Timilehin Adeshina, was arrested.

Task Force Chairman, SP Olayinka Egbeyemi said the boy was rescued by the enforcement team of the agency at Oshodi, adding that the mother was arrested while running away.

Egbeyemi disclosed that the teenage mom confessed that she dumped the baby because she could no longer take care of him, adding that none of her family members was willing to accommodate her and her baby.

The Junior Secondary School drop-out, said she incurred her mother’s wrath because she could not identify the man who impregnated her among the different men who slept with her.
The Ogun State indigene who lost her father…

at February 22, 2017
Email ThisBlogThis!Share to TwitterShare to FacebookShare to Pinterest