Two notorious  armed robbers, Olajide Olayato and Amonimo Johnson known as Akebaje, have been arrested by man of the Ondo state Police Command. 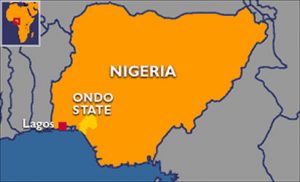 The two suspects and two others, now at large invaded the home of Kolawole Emiola in Abusoro area of the state capital and forcefully made away with his Mercedes Benz C240 with Registration Number Abuja KUJ 700 KZ and three of his mobile number.

Speaking on the development, the State Commissioner of Police, Hilda Harrison, said his men swung into action and apprehended the two suspects in Ibadan, Oyo state capital.

She disclosed that Johnson was a serial armed robber who has been convicted more that five times and said the two men have confessed to the crime.

The police boss said the Mercedes Benz was recovered from the suspects and also confessed to robbing one Micheal Oluwadare of Oka Akoko of the sum of N1.6 million.

The suspects…
at February 22, 2017
Email ThisBlogThis!Share to TwitterShare to FacebookShare to Pinterest