ormer Enyimba International FC player, Ezekiel Bassey has disclosed that he is currently fighting the battle of his life to secure his work permit from the Spanish authorities that will enable him perfect his deal with La Liga giants, FC Barcelona. 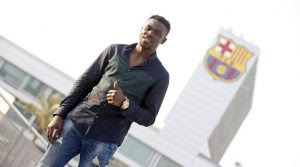 Bassey, who made the disclosure when he visited the Glass House, the secretariat of the Nigeria Football Federation (NFF) in Abuja on Tuesday, admitted that he has passed through hell struggling to secure work permit.

He further noted that he was at the Glass House to get some documents that will facilitate the speedy issuance of the statutory permit required by Spanish authorities.

Expressing happiness over his big move, he also lamented that his inability to get the work permit has equally prevented him from playing any game for the team.

In his words: “I am here because of my work permit because my team asked me to come for it. The process is still on but it seems it is going to be hectic. However I hope to go back to Spain by next week.

“This issue is also the reason I am yet to even train with the main team. I cannot play any game also until I get the work permit. I only watch the main team’s training; but as soon as I get it, I will join my colleagues to play with them twice a week,” he noted.

The former Peoples Elephant dependable forward also expressed satisfaction with his relationship with his Barcelona teammates, stressing that they all relate like one big family, just as he described his move to Barca as exciting and a dream come true.

He equally disclosed that Barcelona fans have not forgotten the artistic display of their former Nigerian left winger, Emmanuel Amuneke in a hurry, adding that the fans over there are always asking of the former winger.
at February 22, 2017
Email ThisBlogThis!Share to TwitterShare to FacebookShare to Pinterest