LAGOS—Gunmen suspected to be militants that have been terrorising Lagosians, introduced a new twist to their activities yesterday, following the abduction of a military personnel at Ijedodo area of Abule-Ado, Lagos. 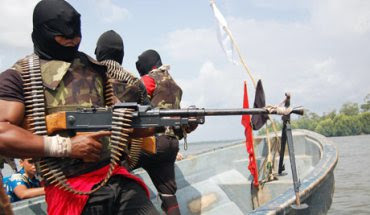 The identity of the abducted personnel, a Lieutenant, could not be ascertained at press time. Military personnel, belonging to Operation AWATSE, were deployed to the area to curb activities of the militants.

Vanguard News gathered that the Lieutenant was kidnapped with his service rifle while on patrol along the axis yesterday evening.

His abduction sparked sporadic shootings as a joint force by the Military and Police invaded the creeks and headed for the kidnappers den. While some teams headed for the hideout, where the abducted Lieutenant was suspected to have been taken to, others remained at strategic points around Ijedodo, Abule-Ado, Totowu, Igando and neighbouring exit points, to ensure that the kidnappers did not escape.

I will brief you when I have a clear picture.” Spokesperson of 9 Brigade of the Nigerian Army, Major Mba Leme, could not be reached for comments, as his phone rang several times but was not picked.


at February 22, 2017
Email ThisBlogThis!Share to TwitterShare to FacebookShare to Pinterest