How I will ‘kill’ corruption in Nigeria – Osinbajo 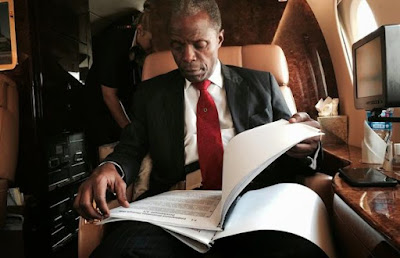 Acting-President, Yemi Osinbajo has said that he will defeat corruption in Nigeria by replicating the model he used to drive down corruption in Lagos State Judiciary to zero percent.

He said he also had the system reformed during his tenure as Attorney-General and Commissioner for Justice in Lagos.
He disclosed this during a talk-shop organized in Abuja by Office of the Vice-President in contribution to the national dialogue on corruption.

Osinbajo recalled that corruption in the Lagos State Judiciary dropped to zero percent following the sack of 22 corrupt magistrates and three judges, and by drastic improvement in welfare.

According to him, prior to the reforms, he once met an honest judge who retired after 10 years on the Bench but lived in someone’s boys quarters because he had no house.

He said a judge’s salary of N67,000 then could not build a house. To reverse the trend, every judge was given a house for life, while their remuneration was increased “considerably”, to the extent that Lagos became a reference point.

“It was because a system was in place and impunity was not allowed. It is important that we put in place models that will work,” he said.

Osinbajo noted that in the United Kingdom, candidates undergo 17 different tests before being appointed judges.

The Acting-President added that the three arms of government must collaborate to put in place working systems that are fair and compliant with the rule of law.

“We must work together – the legislature, the judiciary and the executive – to put a model that must work. We must ensure that systems that are put in place are fair and comply with the rule of law,” he said.

He further said that the anti-graft war will not be won where citizens continue to celebrate the corrupt, adding that the underlying causes of corruption, such as deprivation, also need to be addressed.

Osinbajo said a robust international collaboration was also needed to return stolen assets and to stop the hiding of loot abroad.

“One of the critical issues that we have discovered in our fight against corruption is that we need much more robust international cooperation, especially with respect to return of assets.

“We find that the process of returning assets, aside from the judicial process, is so difficult and so complicated that it could just take you literally years to get assets returned.

“And I think that it is important for countries of the world where stolen assets are located to really work with us in ensuring that these assets are returned speedily. I know that the United Kingdom is working with us in particular on this issue of beneficiary register.

“That will be extremely useful for us because we will now be able to discover who is behind some of the names of companies and other shelves that are used to hide stolen assets.’’
at March 07, 2017
Email ThisBlogThis!Share to TwitterShare to FacebookShare to Pinterest