I robbed to pay my son’s hospital bill – Robbery Suspect 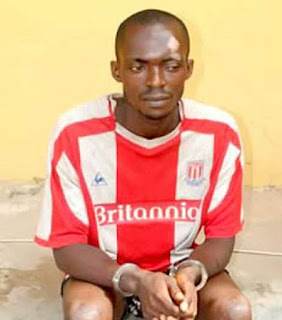 A robbery suspect in the cus­tody of the Abia State Police Command, Uche Udoma, has claimed that he went into rob­bery to raise money to pay his son’s hospital bill.

Udoma, who also claimed to be a car panel beater, said he had not found job to do for a long time, adding that when he needed money to take his son to hospital, there was no option but robbery to raise the money. He confessed to newsmen that, “I’m a car panel beater and I have not done any job for some time now. My son became sick, was hospitalised and I needed some money to pay his bill.

“That was what led me into stealing. I broke into my neigh­bour’s house and stole her Plasma television, but I was caught in the act and the television set was col­lected back from me.”

The operatives of the Anti-Kidnapping Unit attached to the Umuahia Central Police Station apprehended Udoma when they responded to a distress call from one Dr Chioma Okoli, whose house was burgled by the suspect at Amakama Housing Estate, Umua­hia. Upon his arrest, one Plasma television among other household effects were recovered from him.

The Abia State Commissioner of Police, Adeleye Oyebade, con­firmed the arrest of the suspect.

He stated that his arrest was in line with the proactive measures introduced by the state police com­mand, which was targeted at catch­ing and arresting criminals in the act.
at March 07, 2017
Email ThisBlogThis!Share to TwitterShare to FacebookShare to Pinterest