Not fewer than 100 residential buildings in Okpella, Etsako East Local Government Area of Edo, were destroyed by a downpour which occurred on Monday, the News Agency of Nigeria reports. 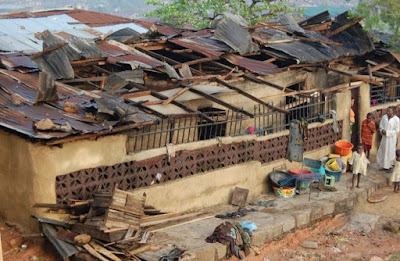 The first rain of the year, which began around 3 p.m. and lasted for about four hours on Monday, also destroyed a school, electrical installations and farmlands.

A NAN correspondent, who visited the affected areas on Tuesday, reports that some residents were seen trying to salvage certain items from the ruins, while efforts were made to clear the debris of some damaged structures.

The classroom block of Iddo Community Grammar School was destroyed by the storm, forcing students to stay outdoors for their studies.

Some of the victims, who spoke to NAN, expressed shock over the incident, describing the rainstorm as the worst in the recent years.

They appealed to the state and local governments as well as well-meaning Nigerians to come to their aid.

One of the victims, Abdulahi Issah, described the development as the “will of God Almighty’’ which no person could have stopped.

He lamented that the entire roof of his house was blown off by the storm, which also brought down part of the fence.

“I am appealing to the relevant authorities to come to our aid, so as to cushion the effect of the rainstorm,’’ he said.

Another victim, Muhammed Muhammed, said that the disaster came at a time when most residents were facing cash crunch, urging Edo State Emergency Management Agency to urgently give succour to the victims.

“Most of us, the victims, are low-income earners who are struggling to cope with the daily challenges of life,’’ he said.

Kashim Otaru, the Vice-Principal of Iddo Grammar School, said that the main building in the school was completely destroyed by the storm, adding that the school authorities had to look for makeshift classrooms for the students.

“The rainstorm has wreaked havoc on our buildings; as you can see, we no longer have a roof over our head or a building where our students can sit down and learn.

“Therefore, we are appealing to the relevant authorities to come to our aid, as our students no longer have a place that is conducive to their studies,’’ he said.
at March 07, 2017
Email ThisBlogThis!Share to TwitterShare to FacebookShare to Pinterest