Real Madrid star adds another Bugatti to his supercar collection

Real Madrid player Cristiano Ronaldo kept a Bugatti to himself after filming a commercial with it. 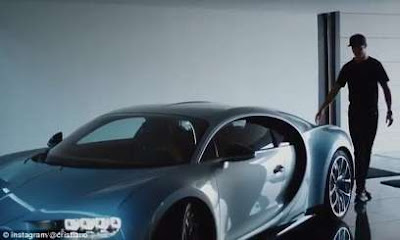 Real Madrid star Cristiano Ronaldo has added another Bugatti to his already collection of supercars.

It seems he has added another Bugatti to it as he was seen in a video take the supercar for a spin around a test track.

According to a Bugatti test driver, they wanted a champion to test and approve the car before giving it out to customers.

In the video which I a commercial for Buggati’s new car, the test driver cuts Ronaldo’s drive saying “give me the keys, you have to call Bugatti, if you want to keep it.”

In the next scene, Ronaldo is seen parking the Bugatti in his garage to show that it now belongs to him.

Ronaldo is a lover of cars and as one of the wealthiest athletes in the world, he is expected to have a big car collection.
at March 01, 2017
Email ThisBlogThis!Share to TwitterShare to FacebookShare to Pinterest