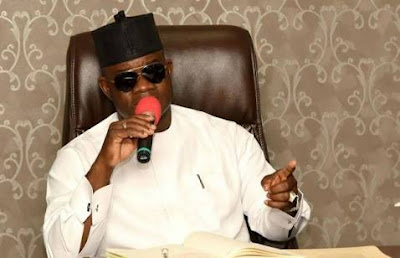 However, Governor Bello said he would not join issue with the Senator, but urged him to wait for police to do their job.

Senator Melaye, in a statement by his Special Adviser on Media, Gideon Ayodele, described the situation as unfortunate and very strange to the socio-political culture of Kogi West Senatorial District.

According to the statement, “Senator Dino Melaye declared his resolution to continue to champion democratic causes targeted at good governance, masses empowerment and the Rule of Law.

“He promised never to relent in his fight against corruption, maladministration, impunity and nepotism. No amount of threat, blackmail, name-calling and harassment will stop him from being the voice of the voiceless.

“It is outrageous that four days after the attempt on his life, the Kogi State governor, the Chief Security Officer of the State, has neither called nor visited to know the state of affairs with him as a serving Senator from the state. The Governor’s deafening silence speaks volumes.”

Governor Bello, in his reaction through his Special Adviser on Media and Strategy, Kingsley Fanwo, said: “We do not want to join issues with Senator Dino Melaye.

“If he accused the Governor of complacency in the so-called assassination attempt, those who have been following the trend from the day his group promised to make Kogi ungovernable will not be surprised.

“The case is under investigation by the Police and making statements about it may be seen to be subjudice. We have been witnessing imaginary attacks in the state and when the Governor travelled to Kogi East, his antagonists also alleged he was attacked even when the opposite was the case.

“As a government, we believe police are capable of getting to the root of the allegation and do justice to it once and for all.

“Governor Bello is redefining leadership in Kogi State, therefore the plan of One-Day One-Trouble will not work. We are in the news for the roads we are constructing, the agriculture we are reforming, the healthcare we are making affordable and the walls of insecurity we are pulling down.”

The governor also said Dino had not called him in person to report the assassination attempt on his life to him, saying “security should never be politicised in our state. We will not be distracted.”
at April 19, 2017
Email ThisBlogThis!Share to TwitterShare to FacebookShare to Pinterest