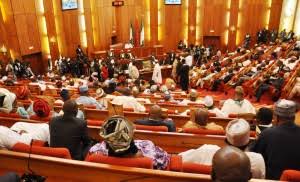 Akure—A member of Committee on National Security and Intelligence in the National Assembly, Prince Mike Omogbehin yesterday said that his committee will probe the involvement of National Intelligence Agency , NIA, in the recovery of an equivalent of N13 billion by the Economic and Financial Crime Commission, EFCC, in Osborne, Lagos State.

Omogbehin however expressed regret that several funds were being discovered by the EFCC without the owners coming forward.

He spoke with newsmen in Okitipupa after presenting annual bursary and empowerment items worth millions of Naira to the people of his constituency in Idepe area of Ondo State.

“The National Assembly on resumption would look into the involvement of NIA in the recent recovered loot saga.

“There is no anti corruption war going on in the country, the war we have in Nigeria is the war by APC at targeted enemies. You can only be corrupt when you are not member of APC.

“All members of the opposition are corrupt. To say there is anti corruption war in Nigeria is an attempt to put wools in our eyes.

“We know what is happening. People are trying to sell candidate that has been rejected through security report made available to us and they are doing everything possible to dirty other people so that they can achieve their aim.

“Nigeria’ parliament will continue to say no to such inducement and pressure.

“The recent issue about American dollars, we are not talking about Yen or Naira. How can such money be kept in a place and the EFCC say there is a whistle blower.

at April 19, 2017
Email ThisBlogThis!Share to TwitterShare to FacebookShare to Pinterest