Britain will seek to ease its way out of the European Union in order to prevent severe damage to its economy. 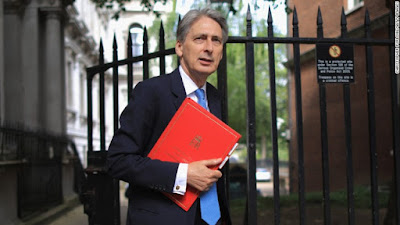 Treasury chief Philip Hammond said Friday that Britain hopes to negotiate a "transitional period" of up to three years after leaving the European Union in March 2019, during which current terms of trade would be maintained.

"There is going to have to be a period during which we move gradually from where we are now to our new long-term relationship with the European Union," Hammond told the BBC.

Hammond said the transitional period, which must end before the next general election due in 2022, is needed to protect the British economy from the shock that a clean break with the EU would bring.

"The government's job is to make sure that our economy can go on functioning normally ... to protect jobs, to protect British prosperity," he said.
Britain gave formal notice to the EU of its intention to leave in March, starting the clock ticking on two years of negotiations. A transitional period after that means the entire Brexit process could take five years.

The plan outlined by Hammond reflects a major shift in the government's thinking since Prime Minister Theresa May lost her parliamentary majority in an election in June.

May was advocating a clean break with the EU starting in March 2019, and had even threatened to walk away from exit talks under the mantra that "no deal is better than a bad deal."

But the government has moderated its position since the surprise election setback. Businesses have been pushing hard for an arrangement that gives them time to get used to the new relationship with the U.K.'s biggest export market.

Hammond said Friday that if the EU agrees the transitional period, very little might change in the immediate aftermath of Brexit.

"I would hope that we would agree a transition which means that in the immediate aftermath of leaving the European Union, goods would continue to flow across the border between the U.K. and the EU in much the same way they do now," Hammond said.

Apart from access to Europe's giant free trade zone, businesses also want reassurances about their ability to hire EU citizens after March 2019. They play a vital role across the economy, from tech firms to banks, the health service, farms and the hospitality industry.

Borders won't be slammed shut
Members of May's government have made contradictory pronouncements on immigration policy in recent days, adding to the impression of confusion surrounding Britain's goals for Brexit talks.

Hammond made clear on Friday that EU migrants were unlikely to be turned away at the border after March 2019, so long as they register when coming in and out of the country. He said there was broad acceptance within the cabinet that a transitional period is needed.

"It will be some time before we are able to introduce full migration controls between the U.K. and the European Union," he said. "That's not a matter of political choice, it's a matter of fact."

The apparent shift in strategy coincides with a barrage of data that suggest Britain's already weak economy may be drifting toward recession.

The U.K. recorded the slowest growth of any European economy in the first three months of the year, and output remained weak in the second quarter.

Brits are saving the smallest share of disposable income in over 50 years and credit card borrowing is at record high. Wages are stagnating and consumer confidence is crashing.

No U.S. trade deal for years?

The threat of further economic pain, combined with the need to get a deal quickly, makes the kind of Brexit described by Hammond the most appealing option for the business community.

Still, the plan would need to be agreed with the EU -- and it would not come without tradeoffs.
Britain could, for example, be prevented from completing new trade deals with the U.S., or any other country outside the EU, during the transitional period.

"We recognize that it will take some time for us to negotiate trade deals with third countries," Hammond conceded. "The important point is that we're able to get started on that process."

-CNN Money(London)
at July 30, 2017
Email ThisBlogThis!Share to TwitterShare to FacebookShare to Pinterest