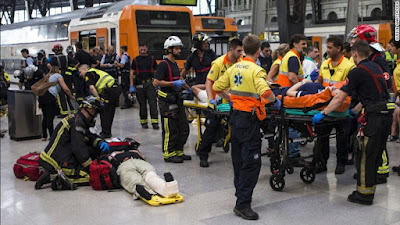 More than 50 people have been injured in a train crash at a major railway station in Barcelona, emergency services said Friday.

The Catalan Emergency Services revised the number hurt to 54 after earlier giving numbers ranging from 40 to 48.

The crash, which it described as an accident, happened during rush hour Friday morning at the Estacion de Francia, a major railway station in the western Spanish city.

One person is seriously injured, 19 people are in a less serious condition, including the train conductor, and another 34 people suffered minor injuries, the emergency services said.

No deaths have been reported, authorities said. The cause of the accident is under investigation.

A video posted on Twitter by Felix Rios appeared to show that the front of the train had crumpled as it hit the buffers.

CNN's Eliza Mackintosh contributed to this report.
at July 30, 2017
Email ThisBlogThis!Share to TwitterShare to FacebookShare to Pinterest