Kenya Begins Work on the tallest skyscraper in Africa

The mighty peaks of Kilimanjaro and Kenya are the highest points in Africa, towering over the East Coast nations. 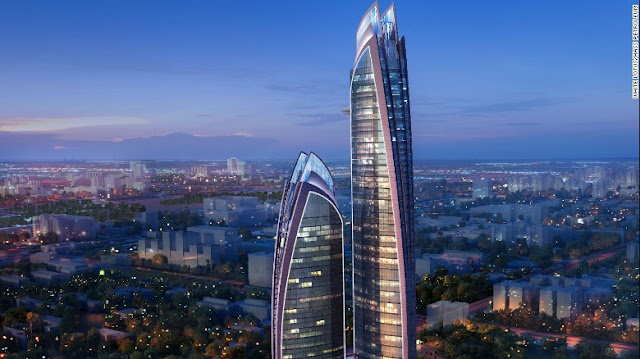 The mountains will soon be sharing a skyline with a man-made behemoth named simply: "The Pinnacle."

Kenyan President Uhuru Kenyatta recently laid the foundation stone for what will be the tallest building in Africa in the Upper Hill neighborhood of Nairobi. Construction is underway at the development site, and slated for completion by December 2019.

Heavyweight backing
The Pinnacle has heavyweight backing in the shape of Dubai-based investors Hass Petroleum and White Lotus Group, which are ploughing around $200 million into the project.

The contract to build the towers has been awarded to China State Construction Engineering Corporation (CSCEC), which is among the world's largest construction firms and has delivered a string of major projects including the African Union headquarters in Ethiopia and the Beijing National Aquatics Centre.

The complex will house a 255-room Hilton Hotel, the luxury chain's third in Kenya and 50th in Africa. The towers will also include elite residences, business and leisure facilities, and a helipad on the roof of the taller tower.

Stakeholders are confident that the development has found the right location.
"Whatever happens in other parts of the world can happen in Africa as well," says Abdinassir Hassan, chairman of Hass Petroleum and managing director of the project. "Nairobi is a hub for East and Central Africa. Why would we go anywhere else?"
Hassan says there is already a clamor for properties on the site, and that this will be "the first of several developments in Kenya" for his company.

Hilton executives are also bullish, noting in a statement that the Upper Hill area is now home to offices of major international businesses and organizations including Cisco Systems and the World Bank.
"The striking new-build property...will be well placed to meet this growing demand in one of Nairobi's most exciting and colorful areas," said Patrick Fitzgibbon, senior vice president for development, EMEA, Hilton Worldwide.

Slowing down?
Kenya's economy has performed steadily in recent years, with healthy GDP growth of 5.9% in 2016 according to the World Bank.

A thriving property market has underpinned this growth, particularly in Nairobi. But there are indications of a slowdown that could affect a luxury development such as Pinnacle.

Prime residential rents declined in 2016, according to a report from real estate firm Knight Frank, and prime retail rents stagnated.

"This is the first time I've seen any kind of market slowdown in Kenya," says Knight Frank Kenya Managing Director Ben Woodhams, who is also serving as a letting agent for Pinnacle.

Woodhams cites a perfect storm of contributing factors, including high interest rates that have hit borrowing and liquidity, as well as the withdrawal of oil companies from Kenya, and the uncertainty of an election year. But in the longer term he sees reasons for optimism.

"We're seeing global corporations that traditionally run Sub-Saharan Africa from Johannesburg putting regional headquarters into Nairobi...and that's a story I expect to hear more and more," he says. "An ambitious project like Pinnacle is ideal for maintaining that interest, and by the time the project comes to fruition Nairobi could be a very different place."

Whether such optimism is justified remains to be seen. But there can be little doubt that Africa's tallest tower will raise Nairobi's profile higher on the world stage.

By: CNN
at July 29, 2017
Email ThisBlogThis!Share to TwitterShare to FacebookShare to Pinterest