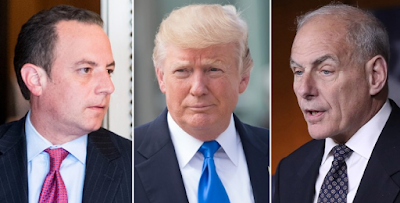 President Donald Trump's decision to replace Reince Priebus as chief of staff deepened the concerns of some Republican state party officials over the direction of the White House.

"I am extremely disappointed," said Robin Hayes, the chairman of the North Carolina Republican Party.

"Reince gave his heart and soul to the administration," he said. "This is not an appropriate reward. And it sends a message to other potential folks who could help them: Watch out."

As the sitting president, Trump largely sets the direction of the Republican Party. But his ties to its nationwide infrastructure are tenuous, and Priebus -- who spent six years as the chairman of the Republican National Committee -- was Trump's most important connection.

Trump's allies in the state parties broadly knew Priebus and liked him. "He knows where the lights are," Hayes said.

"Having a friend in the White House that you've known before, that friend acquired that kind of power -- yeah, there's a comfort level there, no doubt about it," Kaufmann said.

However, he said he feels confident Trump will protect Iowa's status as the first state to vote in the presidential nominating process -- the biggest national priority for Iowa's state parties -- and likes John Kelly, the Homeland Security secretary Trump appointed as Priebus' successor.

"I think there's a sense here that this is a very unorthodox presidency. It's very active. There are multiple ways that this president communicates. And when you do that, you're probably going to see more turnover," Kaufmann said. "Let's face it, it's an exhausting job."

"It's not necessary and it's not productive. It's bothering our folks and this is not New York," said Hayes, in a reference to the home state of Scaramucci and Trump, as well as Trump's daughter Ivanka and son-in-law Jared Kushner -- both of whom are White House advisers.

"We don't talk that way down here," Hayes said. "I wish (Trump) would not allow problems to be created because of untimely and inappropriate comments coming from a number of different places."
Iowa Republican activist and evangelical leader Bob Vander Plaats, who backed Texas Sen. Ted Cruz in the 2016 GOP primary but ultimately supported Trump, also lambasted Scaramucci on the website of his organization, the Family Leader.

"Mr. President, it is time to look in the mirror, accept responsibility, apologize to the American people, and declare an end to this behavior immediately," Vander Plaats wrote.

"I suggest you lead by first washing out Mr. Scaramucci's mouth with a bar of soap," he wrote. "After a thorough rinsing, strip his credentials and escort him personally off the White House grounds."
Across the board, Republican state party chairs said their much bigger beef with Trump and the GOP-led Congress is its failure on health care.

Jeff Hays, the Colorado GOP chairman, said Republicans there are "probably 90/10" willing to continue being patient with Trump's administration.

"I don't think that's in infinite supply. There are people that are really very frustrated," he said -- adding that the anger is largely over the party's inability to repeal Obamacare.

"It has been frustrating. I've tried to be calm about it," Hays said. "I look at this thing as a little bit of a baseball game. The fact that we can't get it done in two swings at the plate or so -- I look at these as foul balls, and I think our team is still in there swinging."

Washington (CNN)
at July 29, 2017
Email ThisBlogThis!Share to TwitterShare to FacebookShare to Pinterest