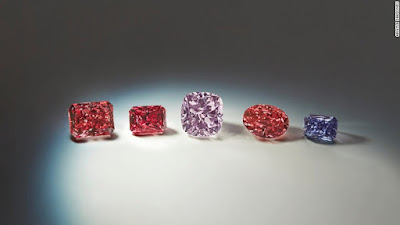 As the head of jewelry in Asia for British auction house Bonhams, Graeme Thompson is used to handling beautiful diamonds on a daily basis. Yet he's only ever held a red diamond once, about five years ago. "Red diamonds are the rarest of them all and whoever gets to hold one in his hand is very lucky indeed," he said.

Mining company Rio Tinto has been showcasing stones from its Argyle mine in Western Australia for the past 33 years -- and during that time, less than 20 carats of Fancy Red certified diamonds have been sold.
Fancy Red diamonds are on the pink diamond color spectrum and is a grading from the Gemological Institute of America.
On Wednesday in New York, Rio Tinto unveiled its largest Fancy Red diamond yet to a select group of collectors, alongside other gemstones in its annual tender of pink diamonds. Known as the Argyle Everglow, the polished radiant cut diamond weighs 2.11 carats.

It represents "rarity within rarity, and will drive global demand from collectors and connoisseurs in search of the incomparable," said Argyle Pink Diamonds Manager Josephine Johnson.

The stone is "half the size of a one cent coin, but I expect it to sell for over $10 million," said Tobias Kormind, Managing Director of 77Diamonds.com, Europe's largest online diamond jeweler.

Thompson said he was not comfortable making a more definitive prediction on price without having seen the stone, but that the determining factors will be "the carat weight, the strength of the color, how red it is, and the clarity. The difference in value between a stone that is very clean and one that has inclusions is huge."

Fetching high prices
The largest red diamond in the world, the 5.11 carat Moussaieff Red, was discovered in Brazil in the 1990s and is currently owned by jeweler Moussaieff.

"The color red is essentially a highly, highly saturated vivid pink, where the body color goes beyond the pink color range -- and there can be modifying color to that red, like pinkish red, orangey red, brownish red -- and all of these contributing factors will then determine the value of the diamond," Thompson explained. "A Fancy Red is the rarest of all diamonds."

"To hold a red diamond in your hand and look at it and say it's a truly a red stone without any modifying colors, very few people on this planet will ever be able to do that," Thompson added, noting such red diamond will appeal to Chinese buyers "as it is the most auspicious of colors in China."

Mine to close soon
The Argyle Diamond Mine produces 90% of the world's rare pink diamonds and is set to close by 2021, according to Robyn Ellison, communications manager for Rio Tinto.

"It is unlikely that a diamond as rare as this will come out of the mine again," Ellison said.
At Rio Tinto's annual tender this year, buyers will have a choice of 58 diamonds weighing a total of 49.39 carats.

They include five "hero" diamonds selected for their unique beauty and named to ensure there is a permanent record of their contribution to the history of the world's most important diamonds.
The collection will be showcased in Hong Kong and Perth with bids closing on October 11.
CNN's Zahra Jamshed contributed to this report.