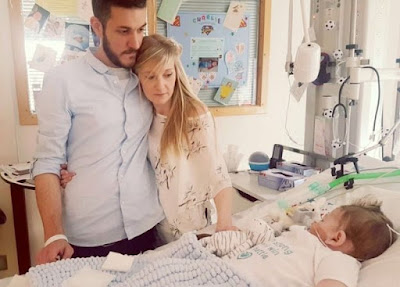 Charlie Gard, the baby at the centre of a legal row over his treatment, has died, a family spokesman has confirmed.

The 11-month-old was moved to a hospice following a High Court ruling.

His parents, Connie Yates and Chris Gard, fought a lengthy legal battle with Great Ormond Street Hospital (GOSH) to allow him to be taken to the US for treatment.

But on Monday they dropped their legal battle after Prof Michio Hirano, the American neurologist who had offered to treat him, said it was too late for it to work.

The tragic case of Charlie Gard
In a statement issued on Friday evening, Ms Yates said: "Our beautiful little boy has gone, we are so proud of you Charlie."

Prime Minister Theresa May said: "I am deeply saddened by the death of Charlie Gard. My thoughts and prayers are with Charlie's parents Chris and Connie at this difficult time."

Pope Francis tweeted: "I entrust little Charlie to the Father and pray for his parents and all those who loved him."

GOSH said it sent its "heartfelt condolences" to Charlie's parents and loved ones.
US Vice-President Mike Pence tweeted: "Saddened to hear of the passing of Charlie Gard. Karen & I offer our prayers & condolences to his loving parents during this difficult time."

On Thursday, Ms Yates said the couple had been denied their "final wish" to have more time with him after a High Court judge ruled that he would be moved to a hospice and have his life support withdrawn soon after.

The couple had wanted to take their son to the US for nucleoside bypass therapy, but specialists at GOSH said the treatment was experimental and that Charlie had irreversible brain damage.

Hundreds of people - called Charlie's Army - lent their support to his parents, who raised £1.35m to take him to the US for treatment.

The couple fought a legal battle for five months, in which judges from the High Court, Supreme Court and the European Court all agreed with doctors that the treatment would not benefit Charlie.
Charlie's plight attracted the attention of Pope Francis and US president Donald Trump.


Following the European Court ruling, the Pope said he was following the case "with affection and sadness".

In a statement released earlier this month, the Vatican said: "For them he prays, hoping that their desire to accompany and care for their own child to the end is not ignored."

The US president then offered his support, tweeting: "If we can help little #CharlieGard, as per our friends in the U.K. and the Pope, we would be delighted to do so."

After his tweet, Prof Hirano co-signed a letter with other medical experts which suggested unpublished data showed therapy could improve Charlie's brain condition.

They claimed that "ideally" the treatment would first be tested on mice but said that, in Charlie's case, there was no time for such a trial.

After examining Charlie a couple of weeks ago, Prof Hirano said it was too late for the treatment to work. An MRI scan had shown there was no muscle at all in parts of his body.

Paying tribute to their son following the end of their legal challenge the couple, both in their 30s and of Bedfont, west London, had described him as an "absolute warrior".

On Monday Mr Gard said: "Mummy and Daddy love you so much Charlie, we always have and we always will and we are so sorry that we couldn't save you.

"We had the chance but we weren't allowed to give you that chance. Sweet dreams baby. Sleep tight our beautiful little boy."

Timeline of Charlie's case:
3 March 2017: Mr Justice Francis starts to analyse the case at a hearing in the family division of the High Court in London

27 June: Judges in the European Court of Human Rights refuse to intervene
3 July: The Pope and US President Donald Trump offer to intervene
4 July: The Vatican's children's hospital in Rome offers to take in Charlie
7 July: Great Ormond Street Hospital applies for a fresh hearing at the High Court
10 July: Charlie's parents return to the High Court and ask Mr Justice Francis to carry out a fresh analysis of the case. Mr Justice Francis says he will consider any new evidence.

27 July: Mr Justice Francis rules Charlie will be moved to a hospice and have his life support withdrawn "soon after" after an agreement to decide his end-of-life care was not reached