US: North Korea could launch nuclear-capable missile by next year

The US believes that North Korea will be able to launch a reliable nuclear-capable intercontinental ballistic missile (ICBM) by early 2018, a US official familiar with the latest intelligence assessment confirmed to CNN Wednesday. 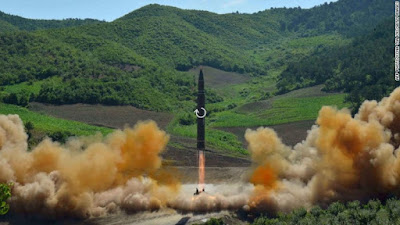 That would be an acceleration of two years from previous estimates that put Pyongyang three to five years from fully developing long-range missile capabilities.

The official clarified to CNN that while North Korea can currently get a missile "off the ground," there are still a lot of undetermined variables about guidance, re-entry and the ability to hit a specific target.

The ongoing assessment from the US intelligence community in recent months has been that North Korea has accelerated its intercontinental range ballistic missile program.

On Tuesday, a spokesperson for the Defense Intelligence Agency declined to comment directly on a report from The Washington Post that the agency's latest assessment concludes Pyongyang will have a nuclear-capable intercontinental ballistic missile as early as next year but admitted that Pyongyang's missile capabilities are progressing.

"North Korea's recent test of an intercontinental range ballistic missile -- which was not a surprise to the intelligence community -- is one of the milestones that we have expected would help refine our timeline and judgments on the threats that Kim Jong Un poses to the continental United States," Scott Bray, National Intelligence Manager for East Asia, Office of the Director of National Intelligence, told CNN.

"This test, and its impact on our assessments, highlight the threat that North Korea's nuclear and ballistic missile programs pose to the United States, to our allies in the region, and to the whole world. The intelligence community is closely monitoring the expanding threat from North Korea," Bray added.

US Ambassador to the United Nations Nikki Haley warned lawmakers last month that Pyongyang's missile program may be advancing ahead of previous estimates.

"You are more optimistic saying it is multiple years before an ICBM comes forward," she said while testifying before the House Foreign Affairs Committee. "I think it's going to happen sooner, because they are on target to do that."

North Korea appears to be preparing for another missile test, according to a US defense official who said that transporter vehicles carrying ballistic missile launching equipment were seen arriving in Kusong, North Korea last week.

The official said that when such equipment is seen, a launch could occur within six days, which would coincide with the upcoming July 27 North Korean holiday celebrating the armistice which ended the Korean War.