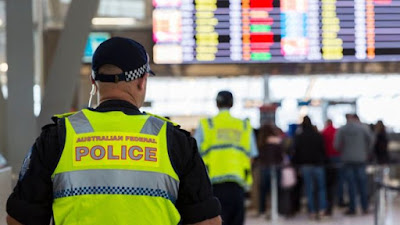 A terror suspect in Australia tried to smuggle a bomb on to a plane by planting it on his unsuspecting brother, say Australian police.

The plan was one of two alleged terror plots recently uncovered by authorities, who made several arrests across Sydney on Saturday.

The suspects were allegedly aided by the so-called Islamic State (IS).
The other plot involved building and setting off a device that could release toxic gas in a public enclosed space.

Police said the plans had been "completely disrupted".


What is claimed about the 'bomb plot'?
Australian Federal Police (AFP) Deputy Commissioner Michael Phelan said this was "one of the most sophisticated plots that has ever been attempted on Australian soil".

He said two suspects had built and concealed a "high-end" military-grade explosive in a piece of luggage.

The plan was for the brother of one of the suspects to take the luggage with him onboard an Etihad Airways plane leaving Sydney airport on 15 July. The brother was not aware of the bomb, said police.
But for some reason the plan was aborted at the last minute, and although the piece of luggage was taken to the airport, it was not checked in. The brother then boarded the flight - whose destination has not been specified - without the luggage.

"There is a bit of conjecture [about] why it did not get through the baggage check-in, but I want to make it quite clear - it never got near [security] screening," he said.
Police say the suspects had assembled the bomb using parts that were sent in one package from Turkey via air cargo, which was arranged by a senior IS figure.

One of the suspects had been in contact with that figure since April.

What was the alleged gas plan?
Police said that when the bomb plot failed, the two suspects started on a second plot which involved creating an improvised chemical device designed to release hydrogen sulphide, or "rotten egg gas".

However, Mr Phelan said the plan was not close to fruition when police intervened on Saturday.
He said police had recovered components and chemicals.

Mr Phelan did not name a possible target for the device.

Who has been charged?
The two suspects - Khaled Khayat, 49, and Mahmoud Khayat, 32 - appeared via video link in a Sydney court on Friday charged with "preparing for, or planning, a terrorist attack".

The pair did not apply for bail during the brief hearing, which was adjourned until 14 November.
If convicted, they face a maximum penalty of life in prison.

The men were arrested along with two others on Saturday when police raided properties in the Sydney suburbs of Lakemba, Punchbowl, Surry Hills, Wiley Park and Bankstown.

What makes the latest alleged plots different is that they are believed to have been co-ordinated abroad, with an IS controller giving instructions over the course of three months.

Police have repeatedly stressed how sophisticated they believe these plans had become, alleging that IS successfully managed to send military-grade explosives into Australia.

That creates a very different dynamic for the intelligence services, who will need to assess whether they can realistically intercept items being flown into the country.

While the security forces have been widely praised for their work in disrupting this alleged plot, they will be keenly aware of how the terror threat is continuing to evolve.

What is Australia's threat level?
The nation's official terror warning level remains at "probable" - the third level on a scale of five.
"This is the 13th time, because of the excellence of our law enforcement agencies, that we have been able to stop a terrorist attack from occurring on Australian soil in the past three years," Justice Minister Michael Keenan said on Friday.

To date, there have been no mass casualty terror attacks on Australian soil.
Last year, Australian police said they foiled a major terror attack planned for high-profile locations in Melbourne on Christmas Day.