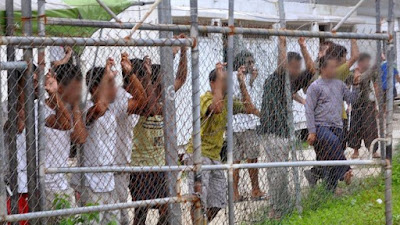 An asylum seeker who was being held at the Australian-run detention centre on Manus Island has been found dead.

PNG police said the man, who is from Iran, took his own life, though reports say other residents contested that.
The man's name has not been released.

Asylum seekers who arrive in Australia by boat are detained at the Manus Island centre and on the nation of Nauru as part of the government's long-standing policy.


Australia agreed to close the Manus Island centre last year after a PNG court ruled that detaining asylum seekers and refugees there was unconstitutional.

Rights groups say conditions in the PNG and Nauru camps are inadequate with poor hygiene, cramped conditions, unrelenting heat and a lack of facilities.
The controversial centre is due to close by 31 October.

by: BBC news
at August 07, 2017
Email ThisBlogThis!Share to TwitterShare to FacebookShare to Pinterest