Members of a civil society organization have defied rain in Abuja to protest the resignation of President Muhammadu Buhari.

The organization, Concerned Nigerians on Monday, August converged at the Unity Fountain in Abuja urging the president to either resume duty or resign.

The group's leader Deji Adeyanju said members of the Concerned Nigerians will march to the Presidential Villa to demand the resignation of the President.

Adeyanju also said the protest will continue tomorrow with a sit-out at the Unity Fountain until the president either returns or resigns.

He added that the sit-out will continue daily from 9 am to 10 am.
"The president cannot continue to remain in London infinitum. Osinbajo cannot continue to function as an Acting President Infinitum.
"You can imagine what happened after the Anambra attack, the Presidency issued a statement, they did not allow Osinbajo to take charge. 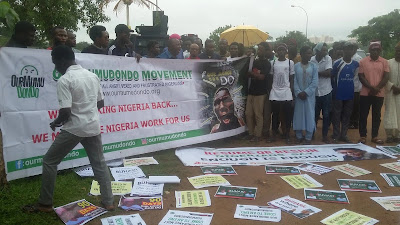 Same with the Sallah celebration, they also released an audio in Hausa for all Nigerians. Osinbajo was not allowed to take charge.

They are holding the country to ransom. It is not by force to remain a president. It is also time for Section 144 is activated.

Snapping picture is not a prerequisite for fitness we must as a matter of urgency call on the president to resume or resign," Adeyanju said.

Also speaking at the protest, the leader of the groupand renowned singer Charles 'Charly Boy' Oputa said: "Our Mumu Don Do."

Charly Boy added that he was at the protest to demand the resumption or resignation of the President.

He said he was also present to support the youths who have been saddled with the responsibility of demanding accountability and transparency from Nigerian leaders.

Also present at venue include officers of the Nigeria Police Force, various police vans and horses.
Source: Naij.com
at August 07, 2017
Email ThisBlogThis!Share to TwitterShare to FacebookShare to Pinterest