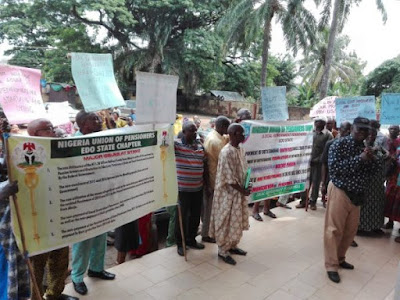 Pensioners in Edo on Monday paralysed commercial activities at the city centre in Benin over the alleged non-payment of several months of pension arrears, as well as their gratuity.
The News Agency of Nigeria (NAN) reports that in their hundreds, the pensioners blocked the King’s Square area of the Edo capital, thereby giving motorists a hectic time to connect to other parts of the city.

Armed with placards of various inscriptions, the pensioners chanted solidarity songs and vowed to continue with the protests until the State Government attended to them.

They accused the government of being insensitive to their plight.

Mr Gabriel Osemwenkha, leader of the “Most Aggrieved Pensioners in Edo,” described the action of the government as “unacceptable” to the pensioners.

He alleged that while the government had deliberately refused to attend to them, several pensioners were going through untold hardships, while some had died.

Osemwenkha wondered what the state government had done with the Paris Club loan refunds that were meant to offset part of the liabilities of the pensioners and state government employees.
“We will remain on the streets of Benin until government decides to answer us.

“We find it even more insulting that government can issue statements of threat over our protest. We have every right to demand for our entitlements; we worked hard for it and should not be viewed as a privilege,” he said.

It would be recalled that the pensioners had embarked on a similar protest last week, when they took to some major streets of the state capital to protest the non-payment of their pension arrears and other benefits.

The state government had reacted by describing the action of the pensioners as a “sponsored protest”. (NAN)
Source:newsexpress
at August 07, 2017
Email ThisBlogThis!Share to TwitterShare to FacebookShare to Pinterest