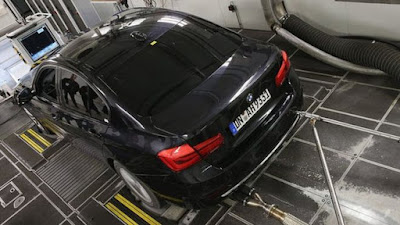 The industry is under pressure since a diesel emissions scandal exposed cheating to manipulate test readings.

The deal was struck at a summit with top politicians in Berlin.
It was approved in Berlin by Daimler, BMW, Volkswagen and Opel, VDA said in a statement (in German).

Car firms are a crucial part of the German economy, providing more than 800,000 jobs.

Pressure to cut emissions increased last week, when a court in Stuttgart upheld a proposal to ban older diesel cars from the city.

It is the home city of Mercedes and Porsche, and one of Germany's pollution hotspots.


'Stop-gap measure'
As the summit got under way, Greenpeace environmental activists unfurled a banner on the roof of the transport ministry saying "Welcome to Fort NOx [nitrogen oxide]".

The VDA said the software updates would be free for motorists and would be just as effective, in cutting NOx levels, as any bans on diesel cars in cities.

Of the five million cars covered by the agreement, 2.5 million are Volkwagens.

The VDA stressed that the software update would not reduce a car's efficiency or durability.

Electric future
Greg Archer of the lobby group Transport and Environment called the software upgrade a "welcome stop-gap measure" but said it was "not a long-term solution to the air pollution crisis".

The BBC's Jenny Hill in Berlin says air pollution now regularly exceeds legal limits in many German cities. It is a headache for the mighty automotive industry and for German politicians, ahead of a 24 September general election.

But Germany is unlikely to commit to ending production of combustion-engine vehicles any time soon, our correspondent says.
France and the UK plan to ban sales of fossil-fuel vehicles from 2040.

But switching to a future of electric vehicles will be hugely expensive - not least because of the need for charging points everywhere.

at August 03, 2017
Email ThisBlogThis!Share to TwitterShare to FacebookShare to Pinterest