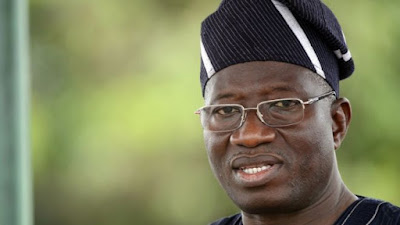 Six policemen guarding the house have since been arrested, his spokesman added.

An investigation into the theft is now under way.

Mr Jonathan lived in the home when he was vice-president, local media say.

Confirming the theft, Mr Jonathan's spokesman said: "The house was totally stripped bare by thieves who stole every movable item in the house, including furniture sets, beds, electronics, toilet and electrical fittings, as well as all internal doors and frames."

He corrected "exaggerated reports in some media" about the items stolen, saying: "Being that the house is a modest, 4-bedroom duplex, it couldn't have been fitted with 36 plasma television sets and 25 refrigerators as falsely reported by some media outlets."
at August 03, 2017
Email ThisBlogThis!Share to TwitterShare to FacebookShare to Pinterest